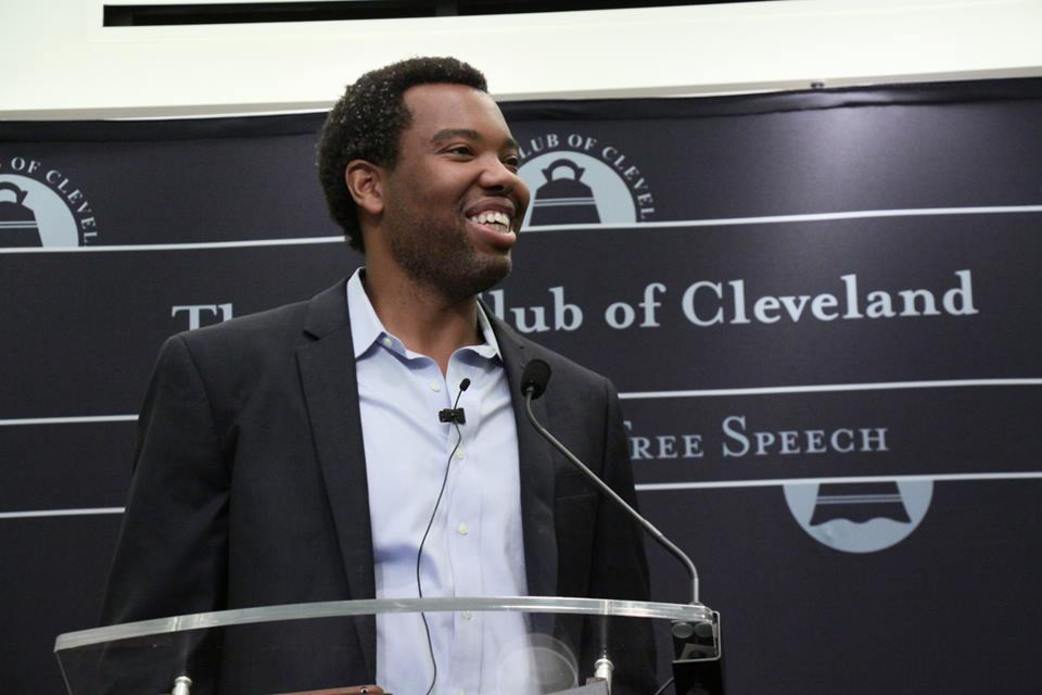 Journalist Ta-Nehisi Coates, national correspondent for The Atlantic magazine, walked to the lectern at the City Club of Cleveland and managed to distill two years of work on “The Case for Reparations” into an eight-word thesis: “What you have taken should be given back.” It’s time, he argues, for America’s moral reckoning with the legacy of slavery.

For Coates, 38, the spotlight has never been brighter. His 15,000-word article in The Atlantic, buttressed by original research, an extensive bibliography and film clips, broke the record for single-day traffic on the magazine’s website when it was published May 21.

Coates took comic Stephen Colbert’s jabs on “The Colbert Report.” At MSNBC, Melissa Harris-Perry invited Coates onto her eponymous show, while Bill Moyers provided an argument-expounding forum on PBS. But Coates, who brought to the City Club both father, William Paul Coates, and an iPad full of notes, was humble. He defined patriotism as “love of country” and pointed out that—just as his father loves him and his wife loves him—love rarely involves telling him what he wants to hear. Mature love, mature patriotism, means facing the things that do not credit the beloved.

Asked by an audience member what reparations would look like, Coates suggested that they could resemble the reparations the U.S. government provided the Japanese-Americans wrongly interned during World War II and the financial compensation made to Jews by the German nation after the same war. He stressed that housing and educational policies of discrimination and racism harm African-Americans to this day and that the same policies undergird white supremacy.

The Baltimore native arrived at the Atlantic in 2008 after stints at Time magazine and the Village Voice. Coates’ regular column at The Atlantic has become a hub of intellectual discourse on the web, where he has held court on everything from the NFL banning the N-word to President Obama’s reproach of young black men in a commencement speech at Morehouse College. Asked about the state of investigative journalism, Coates stressed that his magazine editors put substantial resources into richly documenting “The Case for Reparations” and creating a full multimedia narrative as well.

Coates insists on history. “You have to imagine a society where owning people is not just legal but our greatest intellectuals are arguing that it’s morally correct,” Coates told a silent crowd. “We have to learn to consider enslavement, in that time, as legit an institution as home-ownership is, in this time.” He called out Natchez, Miss., not New York City, as home to the largest concentration of multimillionaires in 1860′s America. This is because it was the major hub for slave trading.

One of Coates’ admirable traits is his quick acknowledgment of his limitations. He told the audience that he had dropped out of college; he demurred from answering a question that he didn’t feel well-read enough to take on. He said that in June he started a seven-week French immersion class at Vermont’s Middleburg College. “I just wanted to go someplace where I was the dumbest person there. I was just bumbling around; I was making mistakes. Because it’s good to be reminded that it’s not about you.”

The best thing to come out of writing the reparations article was that “now I know,” Coates said. “And I can’t be lied to.”

Briefly, he mentioned protests in Ferguson, Missouri, aching to use historical context to uncover an accurate picture. He asked what police—who have used toxic language and intimidating displays of force on protesters and journalists—might have done before the eyes of the nation were upon them. He suggested that those in the audience with white bodies need not worry about a day when they would be shot dead in the afternoon and left in the street for four hours, as happened August 9 when Ferguson Policeman Darren Wilson shot and killed Michael Brown, an unarmed teenager. “All I want to see is some history of the housing there. We can begin with Mike Brown laying on the ground and folks rioting. But there’s just a whole host of questions behind that. How did his family get to live there? What are the conditions like? What’s going on there?”’

Twice during his talk, Coates spoke of the mental and spiritual strain that accompanies being black in America, and his wonder at the continuing optimism of African Americans. He prescribed international travel. “Because this thing will consume you,” he said. “It will eat you. It will eat your soul. It will make you forget you’re a human being with particular likes and dislikes and things that make you different…You are more than a problem that needs to be fixed. It’s important, for our own mental health, to get out every once in a while.”

This post originally appeared on the Anisfield-Wolf Book Awards blog.