The City Club connects people, so it is no surprise that the City Club Centennial book is a product of people connections.  Witness these:

As celebrated in the Introduction to the Club’s 75th anniversary history, David Ford in 1916 picked up at the train station for a Club speech the spokesman for the General then running Mexico, with whom the US was on the brink of war.  David Ford’s son Alan, a member of the Board of the Ford family’s Abington Foundation, successfully shepherded an Abington gift of more than $70,000 to the Club to write a book worthy of the Club’s 2012 Centennial.

With several histories of Cleveland institutions to her credit, Carol Poh was a natural choice as author.  She admired Tom Barnard, a skilled graphic artist with expertise in designing books.  Tom became our designer.  Poh/Barnard proved a dynamite combo.

Hugh McKay, head of the Centennial Celebration, suggested me as a book committee chair, perhaps because he knows my delight in the Club matches up with a delight in words, images, oratory, history and the people who traffic skillfully in such stuff.  I tapped for the committee three former Presidents and a former Director, all dear friends.  Dennis Dooley is a journeyman wordsmith and historian.  Bob Lustig is a walking Club history and a poser of keen-edged Forum questions.  Len Calabrese posed the Forums themselves as program chair for a decade or so.  Jim Foster did everything a Club Director had to do for twenty years.  Most critically, he presented great speakers.

Wally Lanci of Consolidated Solutions became not only a printer for the Club, but a friend of the Club.  CEO Dan Moulthrop told Wally of the emerging excellence of the Centennial book and the imminent hurdle of publication cost.  Wally and his father, Ken, stepped forward.  They volunteered to print the book on the Consolidated Solutions presses – free.

Lay your hands on a copy of Century.  Let it dazzle you.

Go to page 33 in the historical essay which forms the first part of the book.  Look at the picture of the young Tom Campbell, reaching into Irish history for rhetoric to sharpen his plea that the City Club, famously open to ideas, open its doors to women. 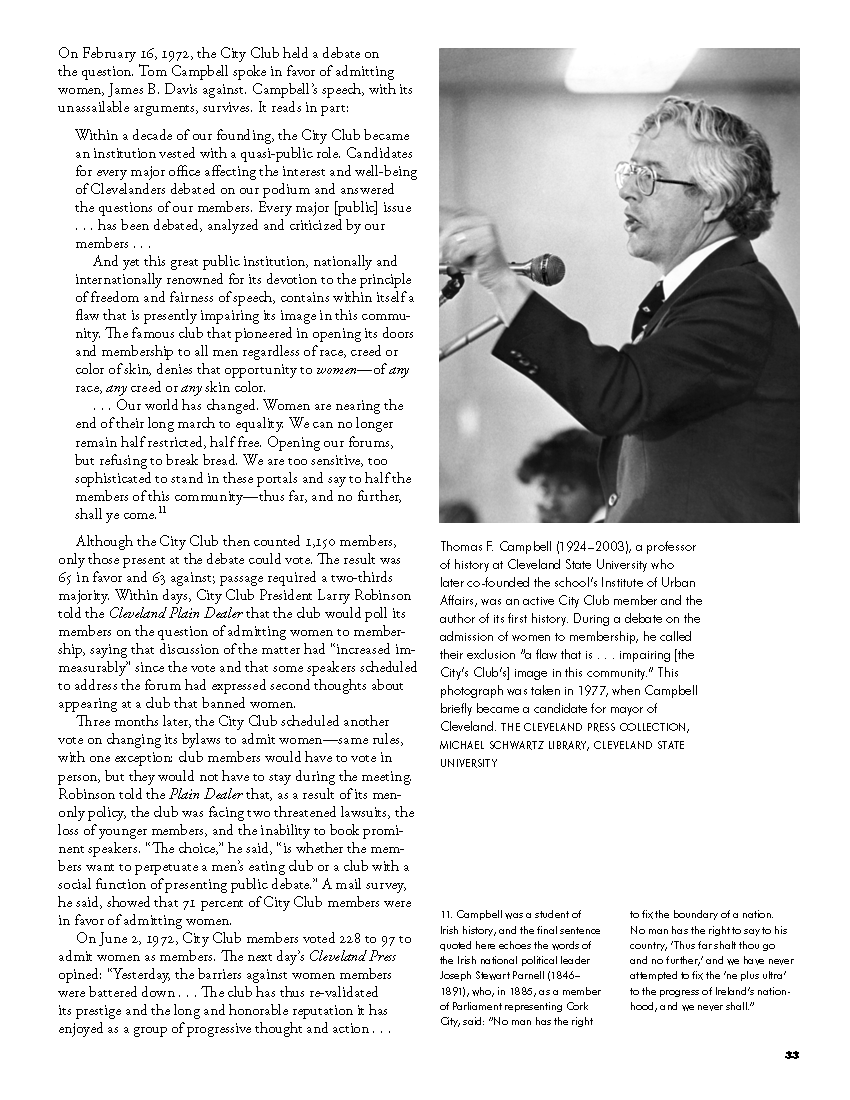 In the Forum profiles which form Part Two of the book, go to page 91 to see the ebullience of Newt Gingrich. 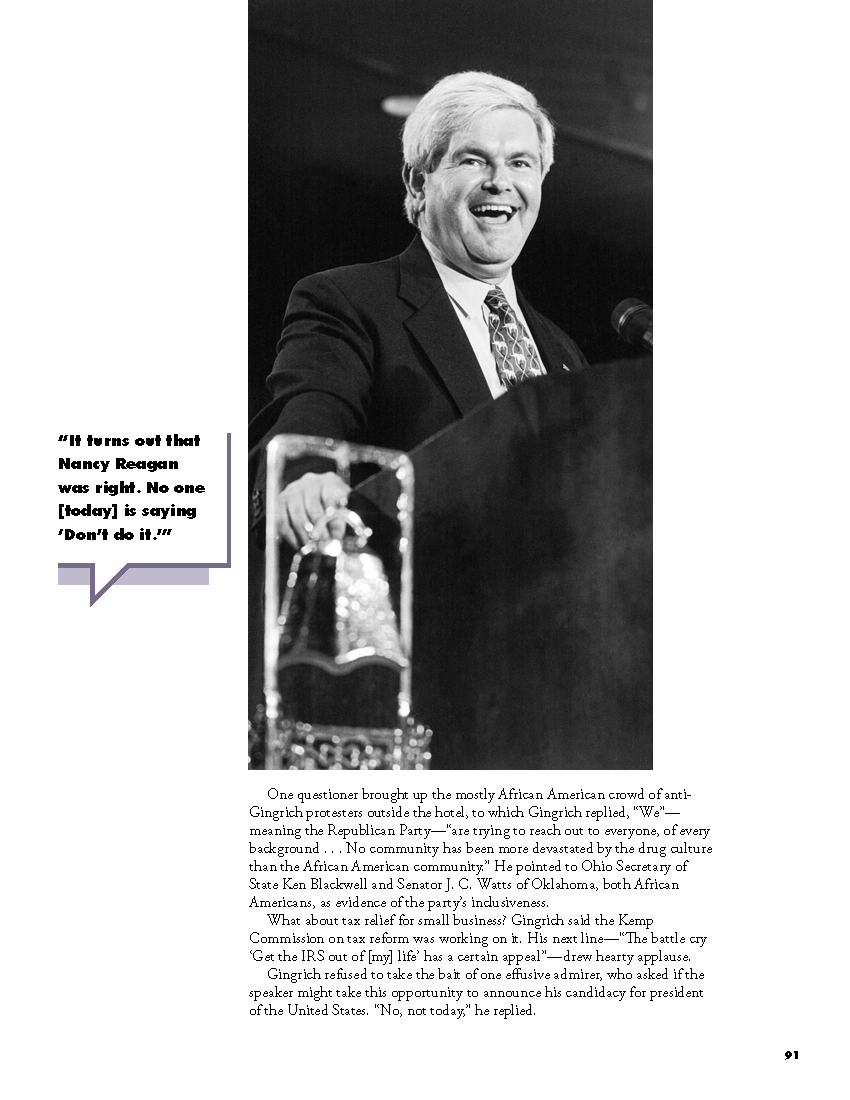 To page 95 for a tale of love and redemption that skirts the limits of the imaginable.

Visit page 147 to glimpse Sister Helen Prejean’s journey to death row as a witness against executions.

Pointing to a crippled Congress, Sen. Alan Simpson grouses on page 155, “If this country is in thrall to the AARP and Grover Norquist, we haven’t got a prayer.”  (Norquist himself appears on page 160.)

Ted Turner’s father achieved his goals but ultimately lost his life to depression.  Page 159 recounts:  “Ed Turner had once advised his son, ‘Set your goals so high that you can’t possibly accomplish them.’  So I did – saving the world . . .”  Turner broke off and slowly rolled his head, amused by his own little joke.”

When you have your copy of the City Club Century in your hands, start by browsing till a year and a leading speaker capture your imagination.  Like Dorothy in Oz, you can wander through the black and white era, then burst into color with Condie Rice (and Kissinger, Albright, Holbrooke, Soros . . . !) in 2004. Read the full entry for the leading speaker you have chosen.  The magic will be there.  The opening gong will sound in your mind.  The speaker will push.  The audience will push back.  The tug of war of democracy.  The squishing of feet in the mud and the grunts and cheers of those pulling on the rope.  The sound of the world trying to save itself.

If you'd like a copy of A Century of Free Speech, consider a City Club membership. You can also buy it at Amazon.com and local booksellers. 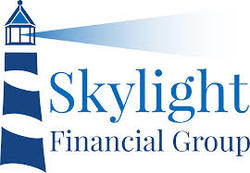