Two elders of the American Civil Rights movement—Rev. Dr. Otis Moss Jr. andRev. Dr. Joan Brown Campbell—went before a sold-out Cleveland crowd to consider “the unfinished business of race,” a topic heightened by the November police killing of Tamir Rice, a 12-year-old playing with a toy gun in a city park. 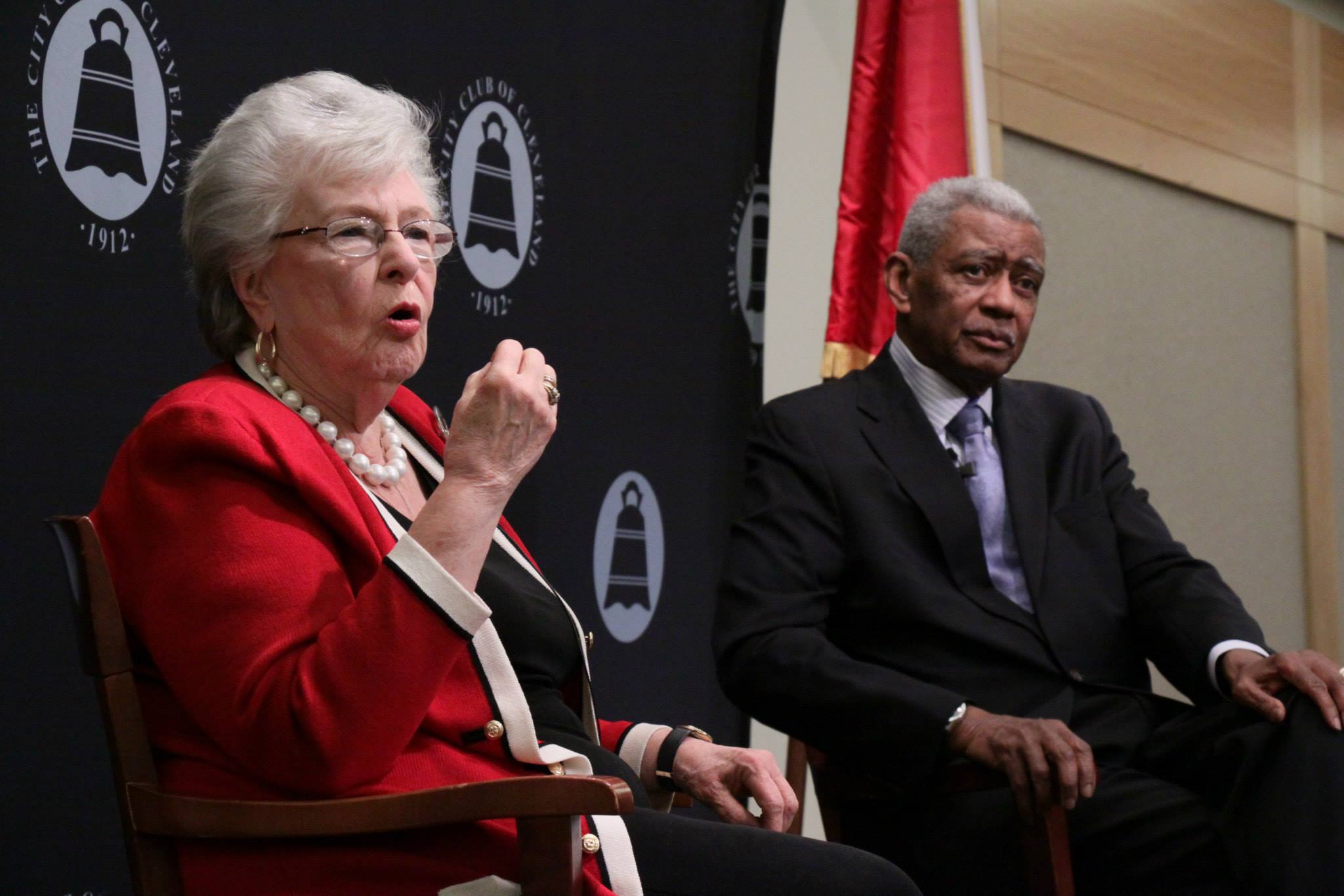 “Tamir Rice was our child, Cleveland’s child, God’s child,” Moss said at the City Club of Cleveland, “and every parent should feel the loss.”

Dr. Rhonda Williams, director of the Social Justice Institute at Case Western Reserve University, came directly to her point: “How do we dismantle white privilege?”

Moss, 79, who counseled U.S. presidents Jimmy Carter, Bill Clinton and Barack Obama, said the movement makes the most progress when its steps are deliberate.  He listed, in order: research, education, mobilization, presentation of findings, negotiation, demonstration.

“The demonstration is not a means to itself but designed to bring about something higher,” said Moss, who served on the inner circle of the Rev. Dr. Martin Luther King Jr. “Whenever we followed the formula, we won. When we did not, we often lost.”

The former senior pastor of Cleveland’s landmark Olivet Institutional Baptist Church cautioned, “We cannot be filled with so much bitterness that our actions are taken as illogical.”

For her part, Campbell, 82, spoke directly to white privilege. She stressed that meaningful racial discussions must be honest, something she and Moss modeled at the City Club, drawing on long decades of friendship.  She described professor John Hope Franklin at the Clinton White House calling on whites to be honest about the advantage they enjoy every morning, walking out of their homes free of suspicion simply because of their race.

“Otis Moss, you walk out knowing how the color of your skin makes a difference in how your day will go,” Campbell said, “even though you are Otis Moss in a town that loves you.”

Moss and Campbell told several stories apiece about victories and struggles waged a half century ago, often evoking King’s name. Throughout the room, there were tables of high school and college students, and a sense of generational change.

“Often we demean young people for going out without our approval, after we did the same thing in our time,” Moss said.  Asked by a retired school teacher what to do about youth ignorance of history, Moss answered, “Adults don’t know their history either. People read history with their prejudices, not their minds.”

Jerome Mills, a senior at Shaw High School in East Cleveland, asked a question much on the audience’s mind: “How can we create change and protect ourselves in today’s world?” The African-American teen stood listening for an answer.

“Be the best you can be,” said Moss, who carries a copy of the Bible and the U.S. Constitution in his brief case wherever he goes. “Whatever you do, do it so well that no one dead, no one living and no one unborn could do it as well. When you become excellent, you become a leader. In your time and in your space, you can make a difference—at Shaw High School, in your community, in your living room and especially in the library.”

Moss held up Atlanta as an example of a city “willing to come to grips with race and racism there,” insisting, “justice is profitable; oppression is expensive,” an echo of the teaching of W.E.B. DuBois.

“In Ferguson, the dead person was put on trial and the living person, the police officer, was defended by the prosecutor,” Moss said, stressing that expecting victims of police violence to have led perfect lives is another form of racism.

Margaret Mitchell, who leads the YWCA Greater Cleveland, announced her organization’s arrangement of “It’s Time to Talk: Forums on Race” February 23 at the Renaissance Hotel in downtown Cleveland.  She invited listeners to join, contribute, and perhaps become a racial justice facilitator for the day.

“It’s time for action, Cleveland,” Mitchell said, “on the unfinished business of race.”