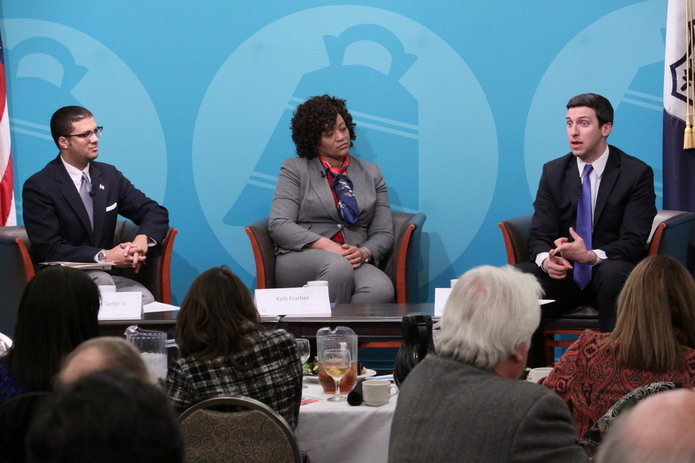 More than 50 leaders from media, academia, and longstanding civic institutions committed themselves late last week to collaborate and create a statewide organization to convene and manage political debates in service to Ohio voters and communities.

“Debates in Ohio are broken,” said Dan Moulthrop, CEO of The City Club of Cleveland, which convened the meeting. “When part of our civic fabric needs mending, it’s up to the leaders and organizations who work in that area to step up and fix the problem.”

Held at the offices of the Columbus Foundation, the April 26th meeting brought together leaders from broadcast, digital, and print media organizations from across the state with a similarly diverse group of professors and administrators from state and private higher education and leadership from the Columbus Metropolitan Club and the League of Women Voters of Ohio.

“We reached out to over 100 organizations,” said project manager Jill Zimon, who is working with the City Club to convene the invited groups. “We are thrilled with the engagement from those who were able to participate, and we expect to welcome many more partners from across the state as we move the work forward.”

Meeting participants explored existing models for similar statewide debate conveners, particularly that of the Indiana Debate Commission and the Washington State Debate Coalition. By the end of the discussion, there was unanimous consent to move forward, and more than 20 attendees committed to serving on committees that will create appropriate governance structures, debate guidelines and address other related issues.

“Everyone agrees that this has to put voters first,” said Moulthrop. “And beyond that, we’re doing this to honor and lift up the important work of political candidates and campaigns. They’re the ones stepping up to serve, and we want to respect that and support them by providing fair and impartial opportunities for them to engage with one another and speak to voters across the state.”

Debate commission members expect to begin work immediately and host debates in advance of the November 2018 general election. The research and convening of the meeting participants was supported by a seed grant from The George Gund Foundation.