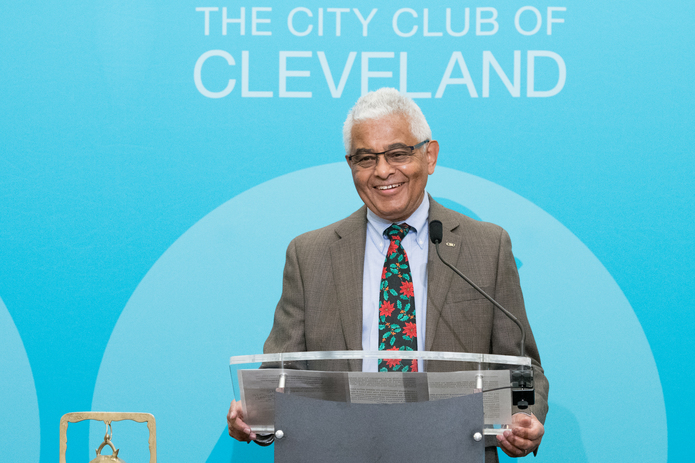 One of the greatest leaders in our community passed away Thursday afternoon. It was wholly unexpected. Steve Minter had recently undergone heart surgery—a scheduled bypass procedure—and had been recovering well. We were shocked to learn the news.

Back in 2003, when Steve retired from the Cleveland Foundation, the community honored him in many ways, among those was a generous contribution to the City Club’s endowment to recognize Steve and his remarkable career with an annual forum in his name. So much has been written about that career, and when you read about it—his early years at Baldwin Wallace to his work as commissioner of public welfare in Massachusetts and in President Carter’s education department and then his pivotal work at the Cleveland Foundation—it’s difficult to fully grasp his impact, much less take in the whole timeline and the extraordinary scope of his work and the life he and his late wife Dolly constructed for themselves and their family. That family includes our Board President, Robyn Minter Smyers, the youngest of the three extraordinary Minter daughters, which is part of the reason Steve’s passing strikes so close to home for the City Club.

The larger reason Steve’s death is so hard to take is because of who he was, what he did for our community, and what he represents. There are few leaders in our community who wouldn’t name Steve as a mentor or a model of civic leadership. On Friday, at our forum, I shared the news of Steve’s death with the audience, many of whom hadn’t yet heard, and some of whom, I think because they’re younger and Steve was professionally retired, didn’t know him. I don’t remember exactly what I said, but it was something along these lines—that in this world of civic leadership, as you’re emerging in your role you look for mentors and models for how to do it, and there was no mentor quite like Steve, who quietly brought people together, asked the most incisive questions about whatever was at hand, made the most judicious decisions, and helped our community move, step by step, towards becoming the community we aspire to be and did it all without seeking credit. Because he was such an important leader, wherever he was, inevitably, people would defer to him; yet somehow he wouldn’t let that dynamic take hold and he would be present in a warm way that welcomed and encouraged and always communicated his support and authentic interest.

Steve received the Cleveland Heritage Medal last year, and in the obituary in Cleveland.com (which is worth reading, along with the one from Crain’s), writer Grant Segall included Steve’s description of how he saw his role, he was quoted in the awards book as saying, “I was pretty good at being a participant and reasonably comfortable taking the lead. I learned if you’re willing to step out there and assume some responsibilities and use reasonably good judgment, people will follow.”

He wasn’t trying to be understated; Steve was just authentically humble. My impression of him, though, is that as humble as he was he was always aware of what his leadership meant and the obligation that comes with the privilege of serving in that role, to always strive to make a difference and to work as hard as we can to improve the lives of our neighbors and those with whom we work alongside for justice and equity. I hope we can all work with that kind of awareness and humility.