Thoughts on Yes She Can! 10 Stories of Hope and Change from Young Female Staffers of the Obama White House 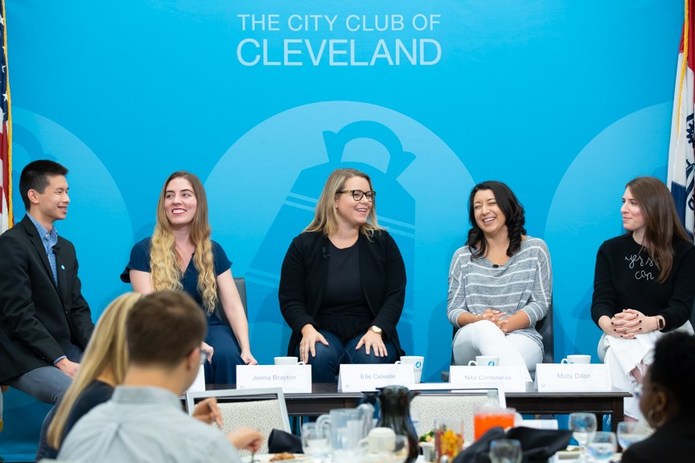 What is it like to work in the White House? What is it like to be a woman working in the White House? These are questions Jenna Brayton, Elle Celeste, Nita Contreras, Molly Dillon, co-authors of the Memoir Yes She Can! 10 Stories of Hope and Change from Young Female Staffers of the Obama White House, answered for hundreds of Cleveland Youth on October 10, 2019. From a Member of the Office of Digital Strategy (Brayton), to an Assistant Director for Biomedical and Forensic Sciences (Celeste), to an Assistant Staff Secretary (Contreras), to a former Policy Advisor for Urban Affairs (Dillon), these former White House Staffers had a very diverse range of experiences. The unifying thread was despite the challenges they faced because of their high ambitions and their gender, they all viewed their public service experiences as meaningful and important and they all wanted to share their stories to the public to inspire future engagement.

These women noted some challenges to which many women can relate, including the question of what to wear and how to achieve the right level of assertiveness. On the subject of wardrobe, Contreras revealed, “we all had a box of shoes underneath our desk, because there is the practicality in wanting to walk fast and wear flats… but then going into a professional meeting or we were walking into the White House… [we needed to have] really nice shoes.” Additionally, they mentioned some more unique challenges including having to pay more for dry cleaning and working in rooms regulated to men’s preferred temperature rather than women’s. Brayton explained that even her “own parents told her [working in the White House] was not an option.” However, the panelists had a focus on hope for the future, and explained that their main hope surrounding gender was to make their stories heard. Dillon elaborated, “Women’s stories aren’t often told. When you read your history textbooks… there’s a box on the side about this one woman… [who] did this one thing. We wanted to make our voices part of the historical… [and] presidential record because we were there.” It was because of the desire to publicize their experience and inspire others to work in public office that these women came together to pen their stories into an account. Though they experienced challenges related to gender, they all agreed that it was difficult to witness the post-Obama Administration rollback and change from their hard work as staffers. Dillon explained that “Watching the things we had worked on get rolled back was very dark.” They therefore wanted to take a step back from their experience and publicize some of the important work they did as staffers.

From writing daily briefings to the president, to working on civil rights policy, these women helped to form and execute the President’s agenda. One of their biggest goals as co-authors is to inspire the next generation of staffers. Celeste explained that “[the staff] are the ones that research those facts, they’re the ones who put the memos in front of [the politicians] and who writes those is just as important as who is sitting them reading the message.” Dillon agreed and added that one of their goals in writing their memoir was “to train the next generation of staff.” These women have clearly shown the impact that staff can have, and certainly hope their message will inspire others to follow in their footsteps.

Overall, Brayton, Celeste, Contreras, and Dillon delivered an informative, uplifting, and inspiring forum for those in attendance, and proved to a sold out room of Cleveland Youth the importance of the values of hard work and persistence, as well as relaying the invaluable contribution that staffers, regardless of gender, can add to the White House.