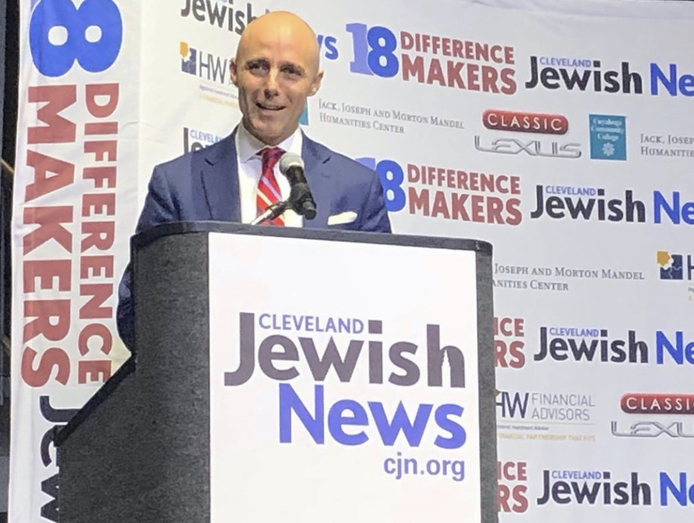 City Club CEO Dan Moulthrop was the 2019 recipient of The Cleveland Jewish News Civic Leadership Award, presented as part of their 18 Difference Makers Celebration. This is adapted from the remarks he delivered at that event.

This work that we do at the City Club is so often at the place where disagreement and contention live; it’s not easy, and it can be thankless, because often, the mere fact of a forum’s existence or a speaker being offered the platform will anger one group or another.

I want to talk to you a little bit about this work of disagreement and contention and convening conversations across difference. I think part of what has drawn me to this work is that I am a Jew. We are a people who love to argue, who love to debate, who love ideas and more than that, love the clashing of ideas. We argue over everything—we’re as likely to argue over the best route to drive to an Indians game as we are to argue over our politics. This is part of what it means to be a Jew. And even secular Jews know that the first big deal, truly famous Jews—the first machers, if you will—Abraham and Moses—they argued with God. Abraham tries to negotiate a peace between the Almighty and Sodom, and Moses first argues against the job description that God has written for him, and later, when God gets a little testy because his people are worshipping a Golden Calf, Moses talks Him down and convinces Him to continue loving the people He saved.

Arguing is in our DNA.

Some of you are probably disagreeing with me right now.

But this is what we do. We love ideas and the clashing of ideas. We love forming our own interpretations and analyses of the state of affairs—who should be in the starting lineup, and who ought to run what kind of campaign for the White House, and what’s right and what’s wrong about whatever’s going on in Congress.

When Senator Bernie Sanders became a national candidate four years ago, with his “here’s how it is and here’s how it should be” attitude, many in our country were taken by the force of his personality, which is ultimately the force of his argument—not so much the content as the conviction with which it is delivered. This guy was new to them, but Jews? we recognized him. He’s your Uncle from Brooklyn whose been reading The Nation forever and has been showing up at Seder your whole life.

And that Uncle—he’s the guy you look forward to seeing, even if you wildly disagree with him, because you want to argue with him so much that you almost can’t wait to bait him with some tidbit from the news.

America is America because we argue about it. Our Constitution, our laws, the precedents that come from our courts, the White House policies that last the longest—they are the negotiated settlements of an adversarial process. And as you all know, it’s also a process that relies on Freedom of Speech, so all of us can participate in the dialogue that creates those outcomes. Because we are Americans, we can lift our voice and call on those who represent us to do a better a job. And because we are Jews, we are unafraid to do that. We don’t know deference to elected office. We argue with God when we have to.

And as I said, we argue with one another all the time.

And one of the reasons we can do it is because of the great bonds of affection we have for one another and for our community. We know that when we argue, we do so to be convinced as much to convince, to create the best possible outcome for the community or the nation or the world, because even after the fight, we will still have one another, and we will continue to till the soil side by side.

I said before that this work we do at the City Club it is so often at the place where disagreement and contention live. When the City Club is in the news, it is often because of the disagreements in the community that are surfaced by a forum or the presence of a speaker. That’s a central part of our work—to provide a forum for the most difficult disagreements.

But as a people—as Jews—we are unafraid of ideas, even the ideas we disagree with, even the ideas we know to be wrong, foolish, or even evil. We mustn’t allow ourselves to become afraid of anyone’s ideas. We are the people who argue, who debate, who come together so that we can share our differences of opinion. I’m so grateful for that, because that is where I find hope in 2019.

I’d like to end on a personal note. As a secular Jew who never belonged to a temple, I haven’t really felt like I was part of a larger Jewish community—apart from that Y Camp in 1985. But here in Cleveland, it feels different. Over the almost 15 years that I’ve been here, I have been made to feel as though this community is my community—sometimes by having been welcomed, sometimes by having been argued with. So for me, tonight feels more than a civic honor. It’s an affirmation of my own identity as a Jew, I feel it very deeply, and I thank you.

Dan's speech was wonderful! He expresses so well the virtues and benefits of freedom of speech, the City Club, and, most of all, Judaism. I grew up Catholic and married a Jew, but neither of us is religious. I now consider myself an atheist. However, I once told my wife that if I could believe in God, I would become a Jew. Why? Because of what Dan said: Jews argue about their religion -- and everything else! By arguing, we are challenged, we think, and we learn.