The Role of Technology in Modern Democracy

by Elisa Pakiela, 12th grader at Cuyahoga Christian Academy, and the 11/12th grade winner of the 2020 Free Speech Essay Contest. For more on this year's contest, click here. 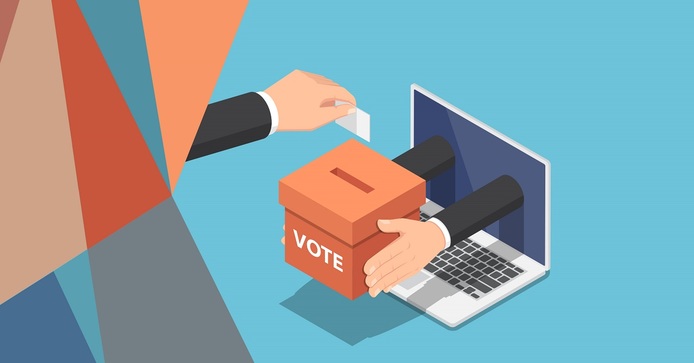 Given the ubiquity of technology in our modern world, it is essential that we pause to examine the motivations behind the use of such advanced digital tools; we can use our resources to innovate or to harm. Ultimately, this tradeoff causes us to explore whether freedom of speech and democracy promote the same values in the technological realm that they have since the drafting of the Constitution. While proponents of data mining argue that individuals do not have to engage online if they do not want social media companies to access their personal information, we live in a world that demands a certain level of digital literacy. Consequently, if we want to preserve our right to free speech, we must have the ability to respectfully share our thoughts online without fear of influence from external companies or campaigns who attempt to mold our political ideologies. This does not mean the ability to post threatening or harmful content, but rather is the only way to ensure digital privacy. If we want to continue to promote democracy in the online era, social media companies must increase the level of transparency regarding the types of data they collect from users.

For many Americans, evidence of data mining on their social media accounts appears innocuous at first glance. In my personal experience, I have noticed and chosen to not take action against the very obvious connections between my Internet search history and Facebook ads. I truly do not mind if a Facebook employee knows that I am in the market for a new vacuum cleaner; this does not reveal much about me other than my desire to keep my house clean. On the other hand, there is a substantial difference between a marketing firm gathering data for targeted advertising and a political campaign actively working to bend users’ opinions in favor of their side. To this end, Institute of Public Affairs Adjunct Fellow Chris Berg distinguishes that “seeing an advertisement is not the same as being controlled by a company” in our current “surveillance economy” (34-35). The primary difference between the two circumstances is that the latter has the potential to misuse the principle of free speech and threaten our democratic rights while the former only seems to sway our shopping decisions.

When a Facebook user likes the page of a political figure or makes a comment on a social issue, his feed begins to reflect these same ideologies. Helen Margetts, professor at the University of Oxford, explains that “automated bots are used to spread disruptive rumors in the form of fake news” and only further promote the idea that a user’s feed serves as an “echo chamber” of his own beliefs (112). Understanding these trends in user behavior, campaigns craft stories specific to an audience they have acquired using data mining and often defend themselves using the principle of freedom of speech when questioned about the validity of their pieces. While campaign writers possess this right as citizens of the United States, it is crucial that we consider historical context when defining free speech rather than using this phrase as an excuse to lie. A recent seminar in my AP Government course reminded me that while our nation revolves around the principle of self-governance, this does not mean asserting our autonomy in a manner that jeopardizes another citizen’s rights. We see this with the promulgation of fake news as campaigns rob particularly vulnerable populations of voters of the right to make informed decisions. The electoral process remains at the center of democracy, but it simply cannot work without the presence of the informed voter who has access to the full spectrum of accurate, non-biased news stories.

In order to support this kind of educated citizen, social media platforms must act in a more forthright manner with regard to privacy policies and implement ways to screen for fake news stories. Yale News warns that “if users feel that their usage of social media can be used freely by third-party corporations, they will likely feel guarded in their future use of these platforms or will cease using them all together,” (McCourt). Given that the Internet stands as one of the primary avenues for modern political discourse, this trend could significantly decrease overall citizen engagement. To combat this issue, social media companies can present their privacy policies in more user friendly language, tempering the legal jargon. Furthermore, they could consider forming bi-partisan committees to evaluate the accuracy of widespread content originating from political campaigns before it appears in users’ news feeds. Should a more significant conflict occur, Professor Jane E. Kirtley of the University of Minnesota advises that the American courts intervene as “both the executive and legislative branches might be perceived as self-interested if they tried to evaluate truth or falsity” (9). Regardless of the specifics, any endeavor to eliminate fake news involves equal action on the parts of social media platforms, users, and the government.

As technology improves, online political involvement will only continue to skyrocket; we must adapt to the changing times. While words such as data mining or fake news may have become part of our vernacular, our essential fight to preserve free speech and democracy remains the same as it has since our country’s inception. We must not let the demands of the digital era overwhelm us, but rather use its unique tools to uphold the fundamental values of the Constitution.