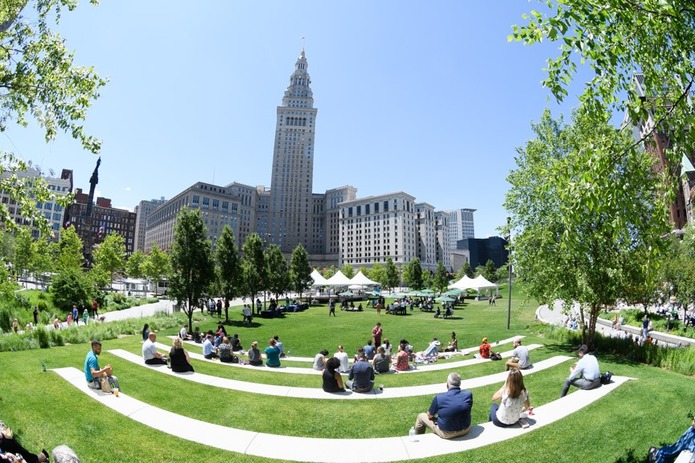 If you’re a City Club member or just a follower of our social media accounts, you’ve probably heard us speak of #HaveGongWillTravel. Over the years, we’ve learned that the City Club is a spirit, not a space, and we have discovered many City Club “homes” outside of our downtown auditorium at the intersection of Euclid Avenue and East 9th Street.

One of our favorite homes is in Public Square. Although we had to take a break last summer, we’ve been presenting a free series of forums that addresses issues facing Cleveland and its neighborhoods since 2016. We’re pleased to announce that the series will return this year starting on Tuesday, July 6!

We’re excited to welcome you and your neighbors back in person. So pack a lunch or grab something from the food trucks onsite, and join us for engaging conversation. We are beyond thrilled to present speakers who are prepared to explore the American Rescue Plan Act (ARPA), their vision of an increasingly diverse Cleveland, and the future of public transportation in our community. We look forward to seeing you in Public Square every Tuesday in July as we continue to do our part to help democracy thrive.

July 6 How to Spend a Billion Dollars: The American Rescue Plan Act and Cuyahoga County Join us in a conversation with Tania Menesse, Ken Surratt, and Will Tarter, Jr. as we discuss the post-pandemic plan and priorities to rebuild our communities.

July 13 A Love Letter to an Anti-Racist Cleveland Founding director of the National Initiative on Mixed-Income Communities Mark L. Joseph will address the growing diversity in the nation and the work of intentionally fostering inclusion and equity.

July 20 The Future of Essential Work Grace Heffernan and Mike Shields will join us in discussing the role of essential workers as Ohio begins to reopen. Our panelists will speak on unfilled job postings and answer questions about job quality and what constitutes a living wage.

July 27 Where We're Headed (and How to Get There by Transit): The Future of the Greater Cleveland RTA General Manager and CEO of Greater Cleveland Regional Transit Authority India L. Birdsong will discuss the “Next Gen RTA” initiative and what it means for public transit going forward.

Special thanks to this year’s City Club in Public Square sponsor, Thompson Hine, for their generous support of this free series.