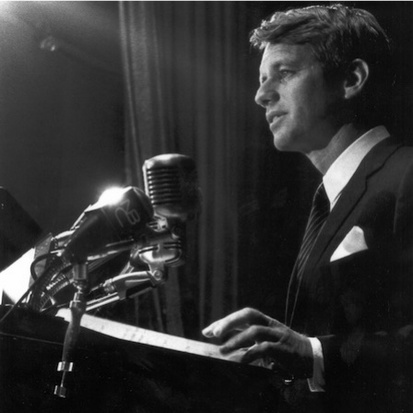 On The Mindless Menace of Violence

"I have saved this one opportunity to speak briefly to you about this mindless menace of violence in America which again stains our land and every one of our lives." – Senator Robert F. Kennedy

"Whenever any American's life is taken by another American unnecessarily - whether it is done in the name of the law or in the defiance of law, by one man or a gang, in cold blood or in passion, in an attack of violence or in response to violence - whenever we tear at the fabric of life which another man has painfully and clumsily woven for himself and his children, the whole nation is degraded."

One day after the assassination of Martin Luther King, Jr., Presidential candidate and Senator Robert F. Kennedy kept his committment to address the City Club. With this speech, Senator Kennedy sought to counter the King-related riots and disorder emerging in various cities, and address the growing problem of violence in American society.

View the full text of the speech here.