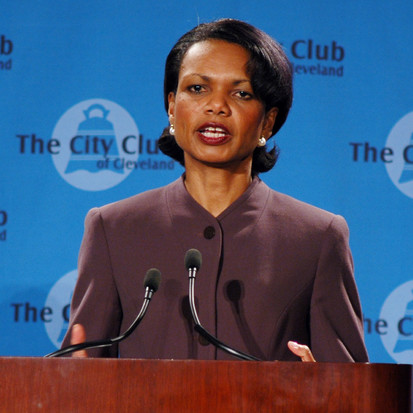 As the first female National Security Advisor, Condoleezza Rice has been a strong force behind the scenes in the Bush administration. One of the most outspoken advocates and defenders of the war in Iraq, her editorial, Why We Know Iraq is Lying, was featured in The New York Times shortly after Iraq claimed they were free of weapons of mass destruction.

When she entered the Univeristy of Denver at the age of 15, Dr. Rice intended to become a professonial pianist, but gained her passion for politics after taking an international politics course taught by Josef Korbel, the father of Madeleine Albright.

Dr. Rice is known for her experise on Russian affairs and arms control. She has written or collaborated on several books including Germany Unified and Europe Transformed (1995), The Gorbachev Era (1986), and Uncertain Allegiance: The Soviet Union and the Czechoslovak Army (1984).

Prior to her appointment as National Security Advisor, Dr. Rice served as Provost and Professor of Political Science at Stanford University and a fellow at the Hoover Institute.