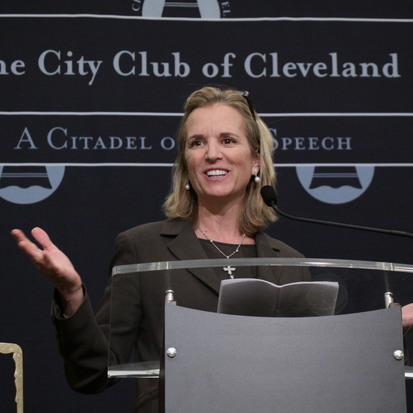 Since 2000, more than 4500 refugees from around the world have settled in Greater Cleveland. A 2013 study found that Cleveland is one of the places in North America where refugees do exceptionally well.

Kerry Kennedy established the Robert F. Kennedy Center for Human Rights in 1988 and has been a vocal advocate for human rights for more than 30 years.

Kerry Kennedy, daughter of Robert F. Kennedy, will speak at the City Club of Cleveland, at a special presentation in collaboration with CityMusic Cleveland’s “Roots to Branches: Music Celbrating Refugees.” Kennedy, whose father delivered the world reknowned “mindless menace of violence” speech at the City Club on April 5, 1968, will discuss the stories of modern refugees and the responsibility of the West to respond to humanitarian crises.