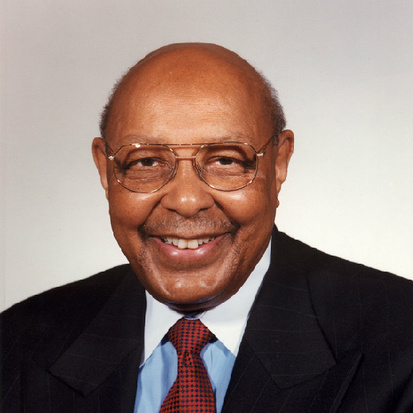 The World According to Stokes

"We failed you, and we should have solved U.S. race problems by now. " – THE HONORABLE LOUIS STOKES

The World According to Stokes is deeply entrenched in the work of Martin Luther King, Jr. Join us for a though-provoking conversation on where we are today - more than 50 years after Dr. King's landmark I Have a Dream speech - as Mr. Louis Stokes is interviewed by two of his children, WABC-TV journalist Lori Stokes and WXYZ-TV journalist Chuck Stokes.

Mr. Louis Stokes represented his Ohio District in the U.S. House of Representatives for 30 years. Elected on Nov. 6, 1968, he was the first African-American member of Congress from the state of Ohio. The thrust of his career focused on advocacy for the poor and disadvantaged, especially those in urban America. He sponsored legislation to help people of color enter the intelligence community, fought for adequate housing for the poor, and was the sponsor of the Disadvantaged Minority Health Improvement Act of 1989. Other legislative efforts included sponsorship of programs for minority professionals in health, science and engineering at the National Institutes of Health and National Science Foundation, respectively. He served with six presidents during his 30 years in Congress. He retired in 2012 as Senior Counsel in the law firm of Squire, Sanders & Dempsey.

Louis Stokes appears as part of the Local Heroes Series sponsored by: