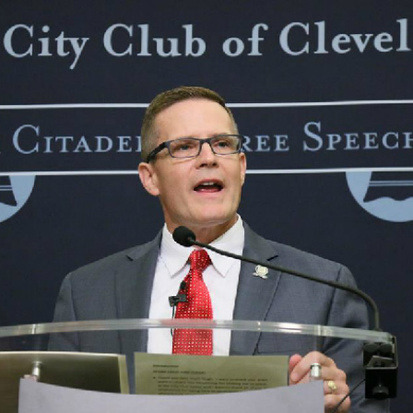 "The notion that Cleveland is an open, welcoming city is something that we've embraced at all levels." – Kevin Kelley

"In his four-year tenure from 1912 to 1916, Newton D. Baker fostered Tom L. Johnson's ideal of a Utopia of Civic Righteousness. He coined a new word to designate his polity; it was 'civitism,' once described as a combination of 'Home Rule and the Golden Rule for Cleveland.' Baker believed that the greatness of a city did not depend on its buildings, either public or private, but rather the intensity with which its citizens loved the city as their home." - from Newton D. Baker: A Biography by C.H. Cramer

Join us for a conversation with Kevin J. Kelley, Cleveland City Council President, as he reflects on past accomplishments, current challenges and promising opportunities for the future of the city of Cleveland.