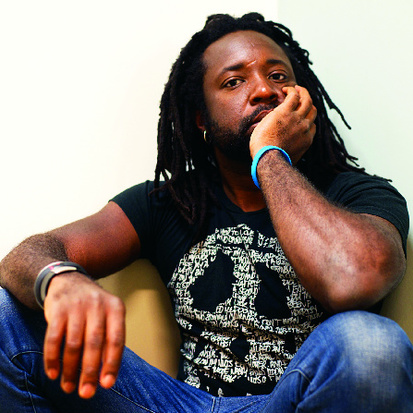 Life and Literature of Marlon James

"If you don't write your stories, someone will write them for you." – Marlon James

Marlon James, 44, grew up in Kingston, Jamaica, and is among the most galvanizing novelists working today. His most recent work, A Brief History of Seven Killings, is long-listed for the Man Booker Prize this year. It showcases his remarkable gifts for exploring corruption and power, politics and music, in a multi-voiced style partly inspired by William Faulkner’s As I Lay Dying. The novel, which won the Anisfield-Wolf Book Award, hinges around a true assassination attempt on Bob Marley in Kingston in December 1976.

James has sold the rights to HBO and is beginning a sabbatical from teaching at Macalester College in St. Paul to work on the screenplay. His earlier work, The Book of Night Women, received the Dayton Literary Peace prize in 2012, the Minnesota Book Award and an NAACP Image Award. Like A Brief History, it was a finalist in fiction for the National Book Critics Circle prize.

Join us for a conversation on the life and literature of this remarkable author.