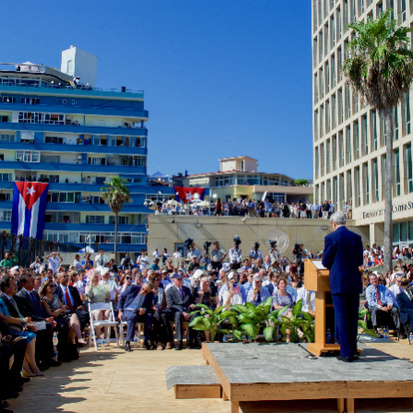 The Case for Opening Cuba

"Not only will Cuba be a lucrative market for us, we can gain a lot from them, including a vaccine for lung cancer." – Ronn Richard

Last year, the United States (U.S.) and Cuba began restoring diplomatic ties and relaxing some trade and travel restrictions. It was a significant thaw in a relationship that has been frosty for more than 55 years. However, it is still a long way from a full scale lifting of the U.S.'s economic embargo on the island nation.

This past year, Engage Cuba has worked to build support for normalizing relations with Cuba both in D.C. and in important heartland states such as Ohio. A recent Atlantic Council poll, conducted by prominent GOP pollster Glen Bolger, found that a majority of Americans, including Ohioans from both parties, support lifting the trade embargo and travel restrictions and endorse the restoration of diplomatic relations. Engage Cuba representatives, their partners at the Atlantic Council, and Mr. Bolger will be joined by Ohio voices for a conversation about the implications of new Cuba policy.