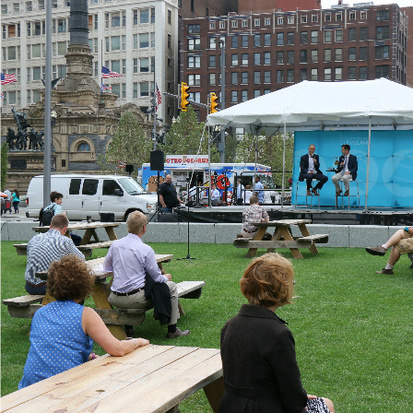 City Club in the Square: Press, Politics, and the Public Good

"This election has opened me up to a new reality. There isn't always two sides to every story." – Henry J. Gomez

The 2016 presidential race continues to defy expectations: major party candidates Donald Trump and Hillary Clinton can't escape scandals, questions of party unity abound, and third party candidates are gaining momentum in key states. Day in and day out every moment of the race is being reported by the mainstream media, but what are we really learning?

Is the media being responsible in their election coverage? Is their coverage influencing candidates' standing in the polls - and the election itself? What kind of precedent is being set for future presidential elections?

Bringing back a tradition that is nearly 100 years old, the City Club is proud to host a free civic conversation on Public Square. Join us for our second City Club in the Square forum as CEO Dan Moulthrop moderates a discussion on the electorate, the media, and the 2016 presidential election.

This forum is sponsored by: