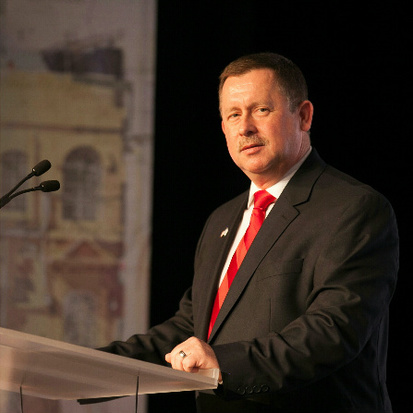 Upstander: Lessons from the Life of Roddie Edmonds

"This world will be the place we want to be if we look to each other and say 'they're first, I'm last.'" – Chris Edmonds

Roddie Edmonds is one of only four Americans to be named Righteous Among the Nations, one of the highest honors given by the State of Israel. It is given in recognition of non-Jews who risked their lives to save Jews during the Holocaust. In 2015, Yad Vashem, the Holocaust Remembrance Center, presented the award to Edmonds' son, pastor Chris Edmonds.

Here's how his heroism is described: "In January 1945, the Germans announced that all Jewish POWs in Stalag IXA were to report the following morning. Edmonds, who was the highest ranking soldier in the American section of the camp ordered all his men, to fall out the following morning – Jews and non-Jews alike. When the German officer, Major Siegmann, saw that all the camp’s inmates were standing in front of their barracks, he turned to Edmonds and exclaimed: “They cannot all be Jews!” To this Edmonds replied: “We are all Jews.”

Edmonds died in 1985. Join us to hear from Chris Edmonds about the importance of standing up against injustice and hatred.