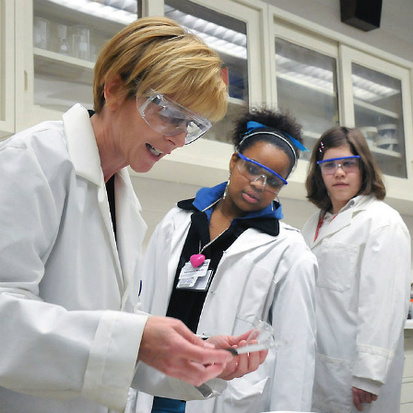 "There is nothing that anyone of any gender or race should think is outside their grasp." – Janet L. Kavandi, Ph.D.

The movie Hidden Figures, released in December 2016, tells the story of the African-American women who played a crucial, but often overlooked, role in the space race and John Glenn's successful orbital mission in 1962. Their success does not tell the story of all women, and women on the whole continue to lag behind men with women of color facing even more obstacles to success in STEM fields. But it's an unparalleled story and one that has resonated with people across the country and across every race.

In the 60 or so years since the Hidden Figures story, women's labor has expanded the economy by an estimated $2 trillion dollars. While women hold nearly half of all the jobs in the U.S. economy, they hold less than 25 percent of STEM jobs. And this is despite the fact that women today are more likely than men to graduate from college and go on to pursue an advanced degree. How can we begin to bridge the divide for women in STEM?

Join us for a discussion with Evalyn Gates, Ph.D., Cleveland Museum of Natural History's Executive Director and CEO, and Janet L. Kavandi, Ph.D., Director of NASA’s John H. Glenn Research Center, on the impacts of increasing women in STEM and the structural and social barriers that still face women.

This forum is part of our Local Heroes series sponsored by: