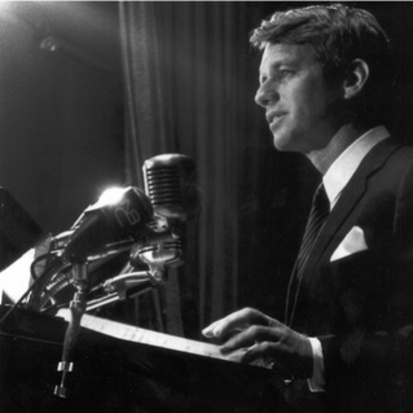 On the Mindless Menace of Violence: 50 Years Later

"In the spirit of Martin Luther King and Robert Kennedy, let us work harder to bind up the wounds of our fellow human beings." – Kerry Kennedy

On April 5, 1968, the day after Martin Luther King Jr. was assassinated, Senator Robert F. Kennedy stood at The City Club of Cleveland's podium and delivered what is considered one of the most important speeches of the 20th century. In what came to be known as the "Mindless Menace of Violence" speech, Senator Kennedy spoke directly to a grieving nation.

"Whenever any American's life is taken by another American unnecessarily--whether it is done in the name of the law or in the defiance of law, by one man or a gang, in cold blood or in passion, in an attack of violence or in response to violence--whenever we tear at the fabric of life which another man has painfully and clumsily woven for himself and his children, the whole nation is degraded."

Fifty years later, the words still resonate. President Barack Obama quoted Senator Kennedy's words in an open letter to American law enforcement in the aftermath of the 2016 shooting of Dallas police officers, saying he "lamented in the wake of unjust violence a country in which we look at our neighbors as people 'with whom we share a city, but not a community.'"

Join us as Kerry Kennedy, the daughter of the late Senator Kennedy and President of Robert F. Kennedy Human Rights, reflects on her father's speech and discusses its lingering power and ongoing relevance in our society with Antioch Baptist Church Senior Pastor Rev. Todd C. Davidson and WKYC Channel 3 News Anchor Russ Mitchell.