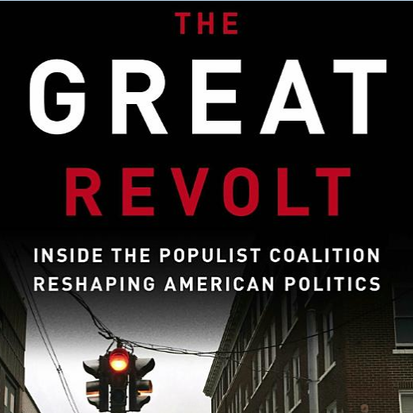 CCMV: Inside the Great Revolt with Salena Zito

President Donald J. Trump’s rapid political rise and subsequent election to the presidency, while a surprise to many political experts and polls, was a welcome change for the millions of Americans who identified with his messages. In the post-election months, the views and demographics of these "Trump voters" have captivated the media. Who are they? And what effect are they really having on American politics?

In The Great Revolt: Inside the Populist Coalition Reshaping American Politics, authors Salena Zito and Brad Todd traveled more than 27,000 miles to interview 300 Trump voters in 10 swing counties.Those interviewed spana variety of careers, income brackets, education levels, and party allegiances – painting a more diverse picture of those who voted for Trump than one might expect. The authors argue that this group of voters represents a united front of a movement that has more impact on our politics than the 2016 election.

Join us as Salena Zito talks with Paul A. Sracic, Ph.D., Chair of Department of Politics and International Relations at Youngstown State University, on the Trump voters, their deep roots in Midwestern culture, and the future of populism in American politics.