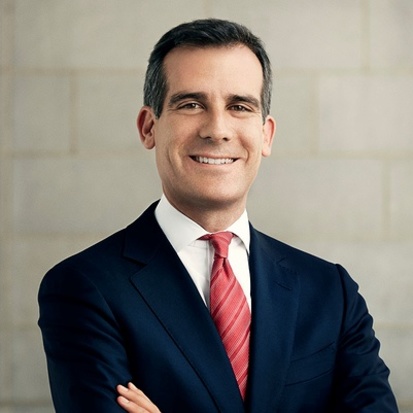 Remarks from The Honorable Eric Garcetti

The Honorable Eric Garcetti was re-elected in 2017 as the 42nd Mayor of Los Angeles with a record-breaking 81 percent of the vote. He is the chief executive of a municipal government comprising dozens of city departments serving 4 million people and also oversees the nation’s largest public utility, the nation’s largest sea port, and the nation’s busiest arrival and destination airport.

Los Angeles has created a record number of jobs under his watch, with Mayor Garcetti creating immediate and future opportunity by implementing a program that will raise the minimum wage to $15 by 2020, cutting the city business tax, making two years of community college free, launching the nation's largest anti-homeless and affordable housing initiatives, and spearheading the passage of the nation's largest local infrastructure plan, the $120 billion Measure M.

Los Angeles was named America’s top digital city in 2016 and 2017 by the Center for Digital Government and, this year, the Bloomberg Foundation selected Los Angeles as the only city to receive its top Gold certification for excellence in city governance.

Mayor Garcetti is a leader among his peers, serving as Chair of the U.S. Conference of Mayors’ Infrastructure Task Force and as Chair of the Mayors National Climate Action Agenda, which organized 392 “Climate Mayors,” representing 69 million Americans, to commit to the goals of the Paris Climate Agreement after President Trump’s withdrawal from the accord.

Want to weigh in on the conversation? The City Club invites you to join the Fund for Our Economic Future at 10:30 a.m. for a special briefing of its Two Tomorrows report, after which City Club CEO Dan Moulthrop will lead a discussion to gather your input on both the current state of the economy, concerns about the future, and where we go from here. Register for this free briefing here.