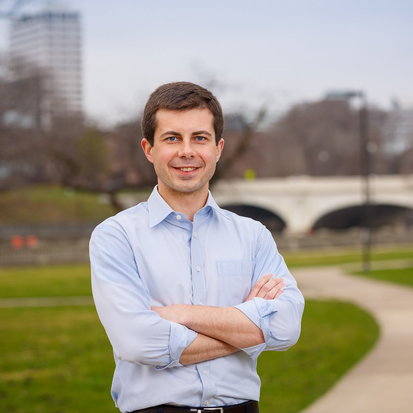 "The time has come for a new generation to add its voice to the national conversation." – Pete Buttigieg

Once described by The Washington Post as “the most interesting mayor you’ve never heard of,” Pete Buttigieg, the Democratic mayor of South Bend, Indiana, has improbably emerged as one of the nation’s most visionary politicians. Buttigieg was first elected mayor in 2011 at only 29 years old and re-elected in 2015 with 80 percent of the vote. Over the seven years that Buttigieg has been mayor, South Bend went from being called one of America’s 10 dying communities by Newsweek to seeing its fastest pace of population and investment growth in recent memory.

Buttigieg’s new book, Shortest Way Home: One Mayor’s Challenge and a Model for America’s Future, interweaves two once-unthinkable success stories: that of an Afghanistan veteran who came out and found love and acceptance, all while in office, and that of a Rust Belt city so thoroughly transformed that it shatters the way we view America’s so-called flyover country.

Books will be available for purchase and signing courtesy of Mac’s Backs–Books on Coventry.

The event is free, but registration is required. Click here to register.