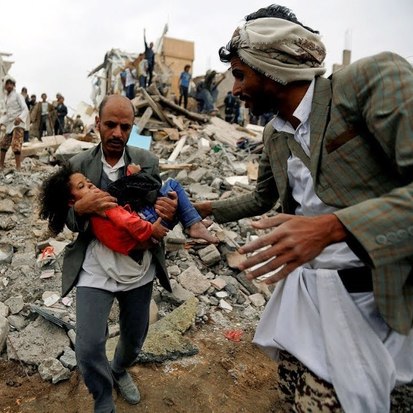 Why — and How — Americans Should Care About the War in Yemen

"If someone’s going to win this militarily, what are they going to win?" – Stacey Philbrick Yadav, Ph.D.

For the last three years Yemen, one of the poorest Arab countries, has been devastated by a civil war that has killed nearly 10,000 people and pushed millions to the brink of starvation. Propelled by the Arab uprisings in 2011, Yemeni society peacefully mobilized protests and forced its long ruling president, Ali Abdullah Saleh, to step down. Today, Yemen finds itself mired in a violent contest between northern rebel groups and Saudi and Emirati forces.

Horrific human rights abuses, as well as war crimes, are being committed throughout the country by all parties to the conflict, causing the United Nations to characterize Yemen as the world's most severe humanitarian crisis to date. As a result, there are bipartisan efforts in Congress underway to stop the United States involvement in the civil war. What effect will they have? What has been the United States' role in this conflict to date – and what future role should it hold in a quest for peace?

Join us as WCPN's Tony Ganzer talks with Stacey Philbrick Yadav, who has lived in Yemen and is a member of the executive committee of the American Institute of Yemeni Studies, about the economic and geopolitical implications the continuing war in Yemen has for the United States and its allies.