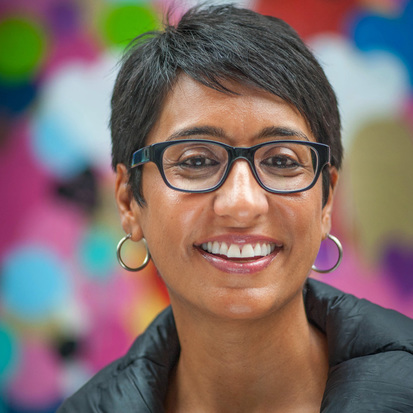 Don't Label Me: And Other Tips for Healing a Polarized America

"It’s important to take the time to engage with someone you passionately disagree with to see why they view things the way they do based on their experiences." – Irshad Manji

It can be argued that fear of the “other” has become somewhat of a hallmark on American life. Nearly every day, we hear political leaders, pundits, and voters alternately express fear and concern about Muslims, progressives, young African-American men, refugees from Syria, conservatives, immigrants from Mexico, and gay and transgendered individuals—all groups perceived as somehow threatening the American way of life.

This fear has crept into our discourse. Civility is declining and opportunities to find common ground are diminishing. In Don't Label Me: An Incredible Conversation for Divided Times, author Irshad Manji and her dog, Lily, engage in a taboo-busting conversation about identity, power, and politics.

Manji is a New York Times best-selling author, the first Oprah "Chutzpah" award winner, and the founder of the Moral Courage Project which shows students, teachers, entrepreneurs, and executives how to do the right thing in face of fear.

Join us for a conversation about diversity, bigotry, and our common humanity.