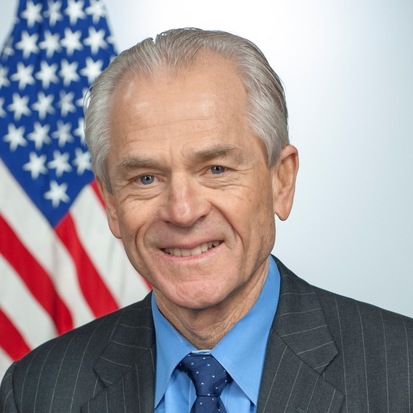 THIS EVENT HAS BEEN CANCELLED. Mr. Navarro's office has committed to rescheduling his appearance for Fall 2019.

Dr. Peter Navarro received his Ph.D. in economics from Harvard University and is a professor emeritus of economics and public policy at the University of California, Irvine. He was an economic and trade advisor for President Donald J. Trump during the 2016 Presidential campaign, and joined the White House staff on Inauguration Day.

At the White House, Dr. Navarro is the Director of the Office of Trade and Manufacturing Policy (OTMP), an office established by President Trump to defend and serve American workers and domestic manufacturers. In his role as Director of OTMP, Dr. Navarro advises the President on policies to increase economic growth, decrease the trade deficit, and strengthen America's manufacturing and defense industrial bases. Dr. Navarro has helped to reform the conventional arms transfer and unmanned aerial systems policies of the United States, and to expand foreign military sales to our Nation’s partners and allies.

Prior to his appointment, Dr. Navarro appeared regularly as a financial market analyst and China expert in such media outlets as CNBC, Fox Business, the BBC, CNN, MSNBC, and the CBS News, including 60 Minutes. He is the author of numerous books on economics, financial market analysis, and macroeconomics, including Death by China, Seeds of Destruction, Always a Winner, The Coming China Wars, If It’s Raining in Brazil, Buy Starbucks, and The Well-Timed Strategy.