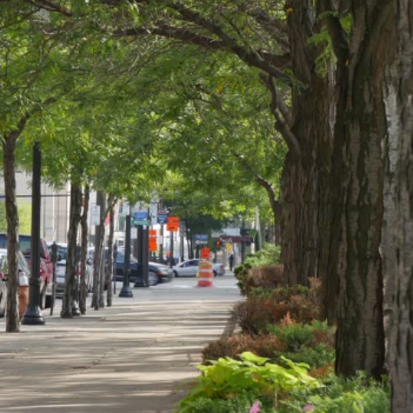 Earth: A Return to the Forest City

"Cities tend to be hotter than greener areas, due to the surfaces of the roads, and trees can mitigate that. Which further decreases emissions." – Daniel Herms, Ph.D.

During the 2015 Paris Climate Change Conference, the international community pledged to limit Earth's warming by 2 degrees Celsius (3.6 degrees Fahrenheit) over preindustrial levels. It's widely considered an ambitious goal — but one with a potential efficient, inexpensive, and natural solution: invest in trees and forests.

Trees absorb and store carbon dioxide, which can slow climate change, absorb rainwater, aerate soil, and reduce energy use through reduced heating and cooling in homes and businesses. But climate change, invasive insects, disease, and development has destroyed much of the urban tree canopy in the United States —including here in Cleveland.

In the late 1890s and early 1900s, Cleveland had more than 220,000 street trees, earning the nickname "The Forest City." In the last 70 years, Cleveland's tree canopy has decreased substantially; today, only 19 percent of the city is covered by a tree canopy with both higher- and lower-income neighborhoods affected.

Several initiatives are underway in Cleveland and Cuyahoga County to increase the number of trees and the economic, environmental, and health benefits they provide. How quickly do trees impact the effects of climate change? Will these initiatives be enough? And, can Cleveland reclaim its title as "The Forest City?"