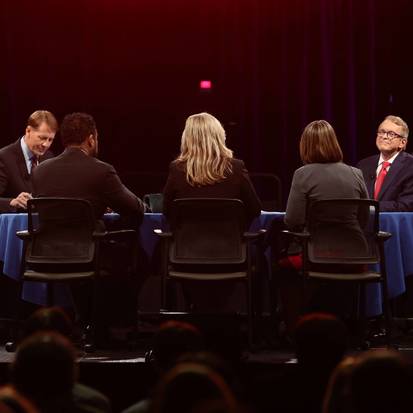 No Debate About It: The Future of Political Debates

"Democracy ultimately thrives on competition. We need a lot of voices and perspectives to make it work." – John C. Green

Political debate has become an expected part of the American political fabric at all levels. And yet, over the last decade, debates among candidates seeking political office have declined. The proliferation of social media, cable news, and other online platforms have given candidates opportunities to connect with audiences in ways that debates used to provide. Furthermore, when it comes to debates, there often is no agreed upon authority, no shared sense of what best practices are, and no clear idea as to what debates ought to look like or strive to accomplish.

As a result, several states have created debate commissions with the goal to convene high quality debates that play a critical role in informing citizens about the issues and candidates on the ballot. In 2018, the Ohio Debate Commission was formed, joining Indiana, Utah, and Washington, as the only states with this type of statewide collaboration. How are they working? What should the future of debates look like?

Join us for a conversation on the emerging role of statewide debate commissions and their potential to create debates that better serve the public, the candidates, and our democracy.