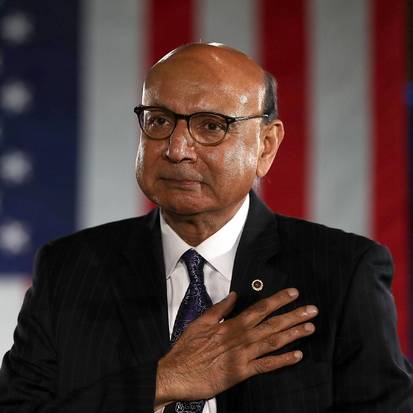 "I have continued to speak. And I humbly ask that you do the same. Speak, organize, vote, and do your most, what you can, from your platform, as dignified citizens of this blessed nation." – Khizr Khan

At the 2016 Democratic National Convention, Khizr Khan delivered a seven minute speech that reverberated across America — and caused sales of pocket U.S. Constitutions to soar. Since then, Khan has authored two books and, through his public speeches on his deep love for the Constitution, found himself at the forefront of the national conversation on immigration.

On September 17, 2019, the United States will celebrate the 232nd anniversary of the signing of the Constitution. The U.S. Department of Citizenship and Immigration Services celebrates that entire week — Welcoming Week — and encourages Americans "to reflect on the rights and responsibilities of citizenship and what it means to be a U.S. citizen." Locally, Global Cleveland is organizing several Welcoming Week activities, bringing communities together to celebrate the unity and strong connection with each other as well as to exhibit and applaud the benefits of welcoming newcomers.

Join us as we hear from author, attorney, and immigrant Khizr Khan to celebrate Constitution Day, Welcoming Week, and the power of citizenship.