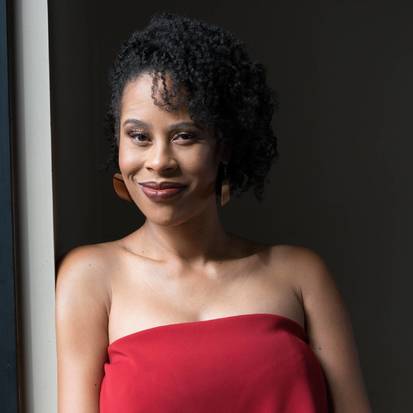 Art as a Tool for Social Change

"The plays I write, they become important, even when I think I’m writing about the past. And I think that says more about society than it does about me." – Dominique Morisseau

Dominique Morisseau is an award-winning playwright whose works portray the lives of individuals and communities grappling with economic and social changes, both current and historical. One of the most widely produced writers in the United States and a 2018 MacArthur Fellow, Morisseau is a powerful storyteller whose examination of character and circumstance is a call for audiences to consider the actions and responsibilities of society more broadly.

Three of Morisseau’s plays will be produced by Cleveland theatres this season: Skeleton Crew (Dobama Theatre), about the auto industry and workers’ rights in Detroit; Paradise Blue (Karamu House), dramatizing Detroit’s jazz community in 1949 before gentrification altered the landscape; and Pipeline (Cleveland Play House), taking on the school-to-prison pipeline and a mother’s struggle to protect her son’s future.

Through the lens of these topical and timely works of art, Morisseau will discuss the importance and impact of art as a tool for social change

This forum is part of our Disrupters series sponsored by