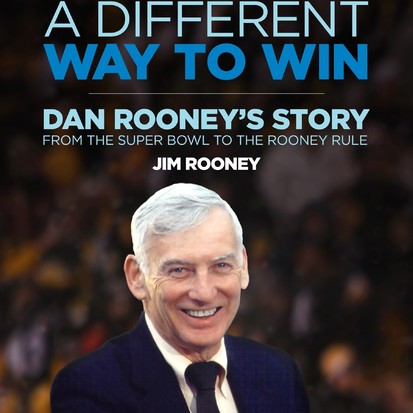 A Different Way to Win: Dan Rooney’s Story from the Super Bowl to the Rooney Rule

"You can be a good person and still win." – Jim Rooney

Jim Rooney interviewed more than 50 people when trying to write the story of his father Dan Rooney, the famous owner and president of the Pittsburgh Steelers.

The result is the new book A Different Way to Win: Dan Rooney’s Story from the Super Bowl to the Rooney Rule. More than simply a biography, the book traces the building of a prestigious franchise in the NFL; the dynasty of the Steelers of the 1970s; Rooney’s decades of work to support reconciliation in Northern Ireland, which led to him becoming U.S. ambassador to Ireland in 2009; and the Rooney Rule, an NFL policy that requires teams to interview a diverse slate of candidates for head coaching jobs.

Established in 2003, the Rooney Rule is now considered a best practice when it comes to diversity and inclusion, and has served as a blueprint for corporate America. Facebook, Pinterest, Intel, Xerox, Amazon, and even the Pentagon have incorporated some iteration of the rule into their hiring practices.

Join us before the Cleveland Browns take on the Pittsburgh Steelers for a free conversation on diversity and inclusion in the NFL (and maybe some history on the famed Cleveland-Pittsburgh rivalry).

This forum is part of our Authors in Conversation series sponsored, in part, by the residents of Cuyahoga Country through a public grant from