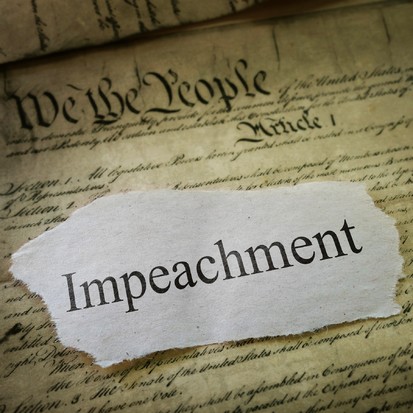 To Impeach or Not to Impeach?

"The President can do something that the President has the absolute legal right to do, but it could still be a high crime or misdemeanor." – Jonathan H. Adler

Impeaching an American President is rare. It’s only happened twice in American history — to Presidents Andrew Johnson and Bill Clinton — and neither of those times resulted in the president being removed from office. On September 24 2019, the House Democrats formally announced an impeachment inquiry into President Trump and his administration's dealings in Ukraine.

The power to impeachment a President, outlined in Article I, Section 4 of the Constitution, is given to the House of Representatives while the Senate is the sole court for impeachment trials. The outcome of this current inquiry is largely dependent on two factors: whether Trump violated the Constitution by committing “treason, bribery, or other high crimes and misdemeanors" and whether his own party will vote to impeach him.

What are the grounds for impeachment? What did the Founders mean by "high crimes and misdemeanors?" How have they been interpreted throughout history? Do President Trump's actions in Ukraine qualify? And, assuming an impeachment inquiry continues, how will the process play out in an election year given our highly polarized political climate?

Join us for a beer as local legal and history experts weigh in.