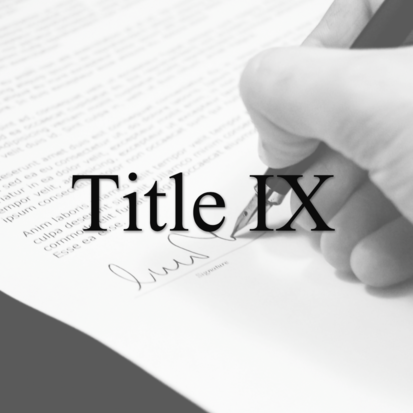 The Uncertain Future of Title IX

"It’s important to remember we are educational institutions. We are here to support all students - including the accused, accusers, and the witnesses." – Darnell Parker

Title IX, passed in 1972, guarantees that all institutions that receive federal funding must provide equal opportunities, facilities, and supplies to students regardless of their gender. But in the ensuing decades, it has been interpreted and expanded to also protect students — both male and female — from sexual violence, sexual harassment, and stalking.

The explosion of the #MeToo movement and the public takedown of many high profile individuals accused of sexual assault and misconduct has sparked heated conversation on how to appropriately handle these allegations, especially when they occur on college campuses.

In the last year, Secretary of Education Betsy DeVos has worked to overhaul Title IX to strengthen the due-process rights of the accused while narrowing the definition of what constitutes sexual harassment. Proponents of the changes believe it will put the rights of the accused on par with the rights of the complainant, an effort that especially protects racial or ethnic minorities who are disproportionally incarcerated at greater rates than whites. Critics argue that the regulations inappropriately favor the accused and discourage victim reporting while making it easier for schools to abdicate their responsibility.

The proposed regulations have garnered more than 100,000 public comments, making Title IX one of the most contentious rules in the department’s history. A final ruling is expected to take several months or years, leaving colleges and universities in a state of flux. What controversies pertaining to the rights of accusers and accused existed before the DeVos proposals? How are colleges and universities grappling with these proposed changes that could significantly alter what constitutes Title IX compliance?