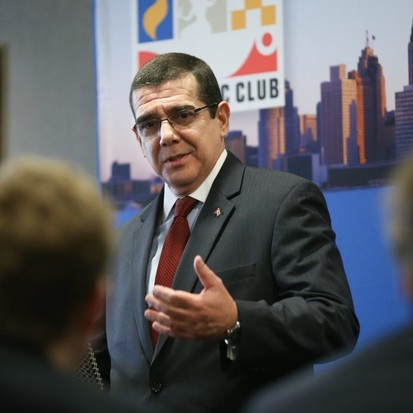 The Future of U.S.-Cuban Government Relations

"We don’t have minorities in Cuba. Everyone is Cuban, no matter where you were born. And you deserve access to a society with no violence." – His Excellency José Ramón Cabañas Rodríguez

In 2015, under Presidents Barack Obama and Raúl Castro, the United States and Cuba began restoring diplomatic ties and relaxing some trade and travel restrictions. The two governments also reopened their embassies, a move met with widespread public support in both countries. It was a significant thaw in a relationship that has been frosty for more than 55 years.

President Donald J. Trump has rolled back many of his predecessor's policies and imposed many of the previous sanctions on Cuba, including travel restrictions. According to President Trump, these actions were necessary due to Cuba's poor human rights record, support for a single-party system, and perceived ties to socialist regimes in Venezuela and Nicaragua.

His Excellency José Ramón Cabañas Rodríguez became the first Ambassador of the Republic of Cuba to the United States in almost 50 years on Sept. 17, 2015.

Join us for a conversation on the strengths and weaknesses of the U.S.-Cuba relationship, the impact of diplomacy on the relationship’s trajectory, and what we can expect in the ongoing reconstruction of the relationship.