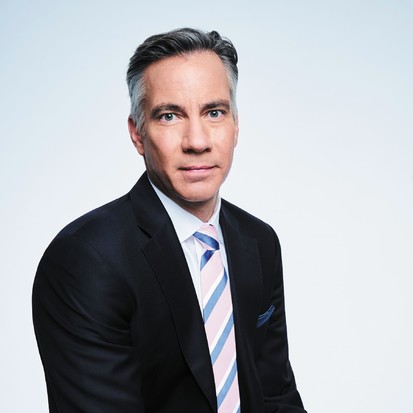 Trump in the World: CNN's Jim Sciutto on the Past, Present, and Future of U.S. Foreign Policy

"In this book, I speak only to people who served this president, who were appointed by him, and they describe multiple incidents where he surprised his own team or contradicted his own team." – Jim Sciutto

Jim Sciutto is CNN Chief National Security Correspondent and anchor of CNN Newsroom. After more than two decades as a foreign correspondent stationed in Asia, Europe and the Middle East, he returned to Washington to cover the Defense Department, the State Department, and intelligence agencies for CNN.

In his new book, The Madman Theory: Trump Takes on the World, Sciutto provides a sweeping assessment of Donald Trump’s presidency when it comes to foreign policy. He highlights how President Trump’s often unpredictable behavior − including threats to meet North Korea with “fire and fury” and to pull the U.S. out of NATO and NAFTA − have unnerved enemies and allies alike. According to Sciutto, this volatility has led advisers to hesitate in giving the President military options because they feared he could start a war.

Join us as Sciutto discusses the lasting imprint President Trump has left on the world after four years in office, and get his take on how that will shape America’s place in the world now and in the future.

Want to read the book? Buy local at Mac's Backs! City Club members are eligible for a 20 percent discount on the purchase of this book. Email Alyssa Giannirakis for details.