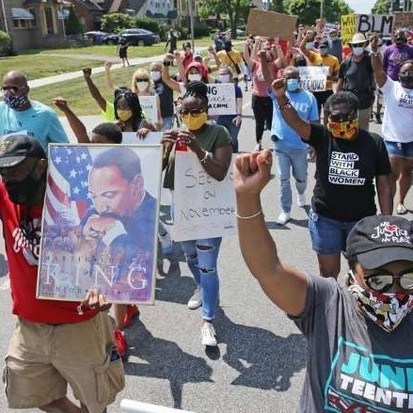 The continuous struggle for human equality for Black Americans in the United States spans centuries. The recent Black Lives Matter protests that have followed the killings of George Floyd, Breonna Taylor, and Ahmaud Arbery by police officers are now being compared, in the media, to the civil unrest of the1960s. At that time, the national response to the assassination of Martin Luther King, Jr.—combined with ongoing protests over civil rights and the Vietnam War—plunged an already divided nation more deeply into turmoil.

Then and now, Cleveland holds a symbolic place in the history of civil rights in America, consistently ranking among America's poorest and most segregated cities. From the Hough uprising and the "Glenville shootout," to the most recent Black Lives Matter protests and all of the events of the intervening five decades—the founding of the United Freedom Movement, the election of Mayor Carl Stokes, the desegregation of Cleveland’s public schools, the killings of Tamir Rice, Malissa Williams, and Timothy Russell by police—Cleveland’s history on civil rights and racism is the nation’s history.

Join us as an intergenerational panel of leaders, all whom held leadership positions at the Cleveland Branch of the NAACP throughout the las 60 years, discuss how the lessons from previous civil rights movements can and are influencing what is being done today.

Your nine local library systems and The City Club of Cleveland invite you to participate in Northeast Ohio’s largest book club, One Community Reads: Racial Equity in America