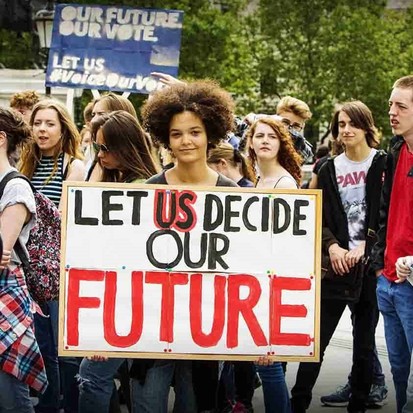 Youth Forum: How Youth are Impacting and Getting Involved in Politics

"When you make your voice heard, the issues you care about will make it onto the agenda. Your voice can be very powerful." – Lauren Copeland

Historically, the United States has one of the lowest rates of youth voter turnout in the world. For Americans under 30-years-old, the voter turnout rate is nearly 38 percentage points below the rate of eligible voters older than 60.

This disparity isn't necessarily for lack of enthusiasm or interest. In fact, teens have regularly made headlines during the current presidential voting cycle for their activism and continued interest and investment in politics. This enthusiam was also evidenced by the support base of former presidential hopeful Bernie Sanders. Sanders, an Independent turned Democrat, regularly boasts a base of potential voters who heavily skewed young. However, each time election day rolls around, turnout is dismal once again.

How the gap between enthusiastic youth and lasting political involvement and change be bridged?

Studies have shown closing the gap could be made possible by simplifying the means by which eligible people can vote, or even automatic voter registration. Potentially lowering the voting age is a possible solution gaining national traction, with the goal to lead to an increase in interest in politics for America's upcoming generation.

Join us for a City Club Youth Forum discussion on the impact of youth political activism and the influence of their vote.