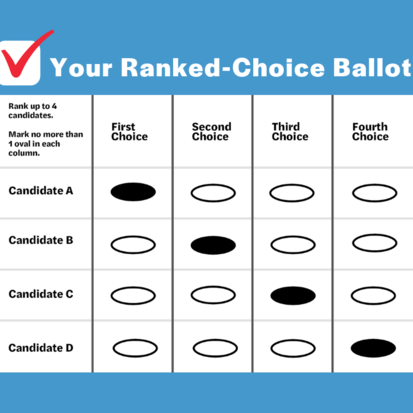 Another Way to Vote? Ranked Choice Voting and the Future of American Elections

Two of America’s most recent presidents won the election, but lost the popular vote. When over 50 percent of U.S. voters oppose a candidate − yet these candidates can still win public office − it is no surprise that the nature of American voting is being called into question. In Maine, nine of the eleven gubernatorial elections between 1994 and 2014 were won with less than 50 percent of votes. That is, until Maine became the first state to implement ranked-choice voting (RCV) for statewide elections for Governor, state legislature, and Congress. They will also be the first state to implement RCV in the upcoming federal election.

RCV allows voters to rank their choices among as many of the candidates as they want, and no candidate is declared the winner until someone receives more than 50 percent of the votes.

Supporters of RCV believe the system provides more choices for voters; ensures that winners represent the will of the majority; and discourages negative campaigning. Critics point to the difficulty, confusion, and expense that would result from instituting a new national voting system, especially one that has been minimally tested.

As Americans brace for what is forecasted to be a contentious national election, what if there was another way to vote? Join us as we explore RCV with a panel of national experts.