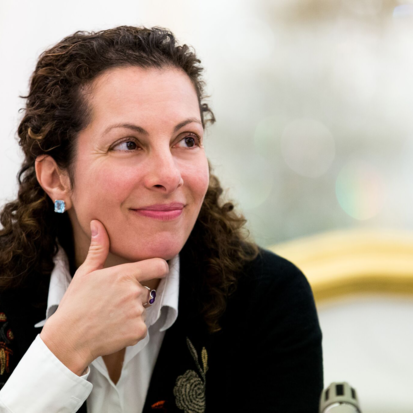 "Instead of thinking about government as something that happens behind closed doors, tech allows us to recreate government institutions that listen." – Beth S. Noveck, Ph.D.

In March, the Urban Land Institute Cleveland and the City of Cleveland will present a virtual symposium, Building a 21st Century City: The Future is Now!. The Symposium will focus on how Cleveland can embrace advances in technology, mobility, and economic inclusiveness to result in a more competitive and smarter city, ready for the changing technology of the 21st century.

New Jersey has emerged as one of the most innovative and technologically engaged states in the nation. In 2018, New Jersey Governor Phil Murphy appointed Beth S. Noveck as the state’s first Chief Innovation Officer, responsible for making government services more responsive and jumpstarting its innovation economy.

Noveck directs the Governance Lab (The GovLab) and its MacArthur Research Network on Opening Governance. At the GovLab, she directs better governance programs, including work with public institutions on public engagement in lawmaking (CrowdLaw), expert-sourcing innovative solutions to hard problems (Smarter Crowdsourcing), and co-creation between cities and citizens (City Challenges). She also coaches "public entrepreneurs," working with passionate individuals to take their public interest projects from idea to implementation.

Join us as Noveck shares her experiences at the intersection of technology, academia, and state and local governments, and offers insights on what Cleveland needs in order to succeed in the 21st century.