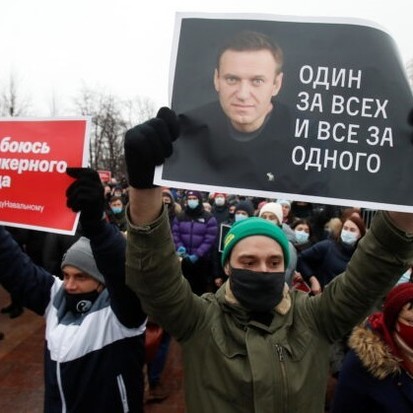 Russia, Putin, and the Pro-Democracy Movement

Alexei Navalny, an anti-corruption investigator and Russian President Vladimir V. Putin’s most prominent critic, is determined to challenge the authoritarian leader and change Russia's political system. He was arrested on January 17 upon returning from Germany, where he spent five months recovering from a nerve-agent poisoning that he blames on the Kremlin. Putin has denied being involved. Navalny is currently jailed for violating the terms of a 2014 conviction, a conviction Navalny maintains is politically motivated.

Navalny’s arrest and jailing has prompted the biggest dissent the Russian government has faced in years, and the peaceful protests that have occurred across Russia have been met with heavy police presence and thousands of civilian arrests. The situation has also heightened tensions between Russia and the European Union (EU) − Moscow expelled three European diplomats for allegedly attending demonstrations in support of Navalny and EU officials are considering proposed sanctions in response to Russia’s refusal to engage on human rights.

Just how strong is Navalny’s opposition movement? How will the Kremlin respond to the most significant rebuke of its power? And how does the outcome affect Russia's standing in the European Union − and the world?