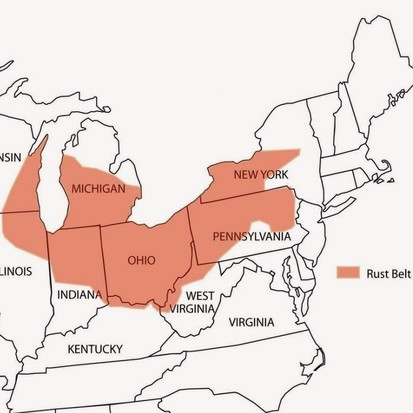 Why Rust Belts Matter Around the World

"The messaging of populism is so destructive, and it offers the wrong answers about the future. If we don't accelerate economic opportunities, people will keep responding to populism." – John C. Austin

In America and other Western democracies, older industrial communities are in a painful process of economic transition. These geographic regions were once economic powerhouses, but have experienced a decline in manufacturing, and a subsequent decline in local economies, property taxes, education, and other community assets. Research has shown that when election season rolls around, residents of these geographic regions are also increasingly likely to latch onto populist candidates like Donald Trump or Marine le Pen.

Neopopulism thrives in rust belt communities across the globe – communities where residents are responsive to the messages of nationalism, nativism, retreat from the international community, and nostalgia for days gone by offered up by right-wing populists. Yet, evidence also suggests that when these communities have economic hope, the appeal of populism wanes. Economic condition and the appeal of populism are inseparable, and if the United States and Europe do not address the feelings of alienation and desperation produced in these communities, they will continue to face the rise of angry electorates willing to give voice to chaos-causing, antidemocratic candidates.

Join us as national experts discuss the transatlantic effort to diminish the appeal of populism, revitalize rust belt economies, and restore democracy.