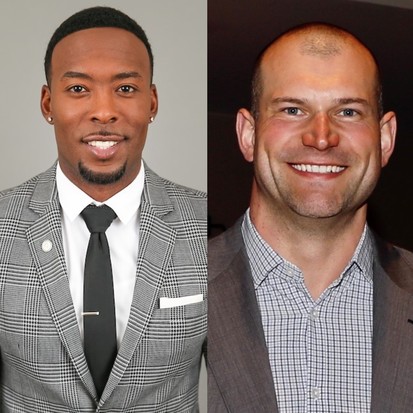 The Forum of Football: Browns Alumni’s Platform for Social Equality

Cleveland Browns' teammates Andrew Hawkins and Joe Thomas are co-hosts of the popular The ThomaHawk Show podcast in addition to their current roles with NFL Media.

An undrafted wide receiver out of Toledo, Hawkins started his professional football career with the Canadian Football League’s Montreal Alouettes before joining the NFL in 2011, playing first for the Cincinnati Bengals before signing on with the Cleveland Browns in 2014. Hawkins also serves as the Director of Business Development for The SpringHill Company, a video-production and entertainment organization led by LeBron James and Maverick Carter.

Thomas was a 10-time Pro Bowl selection and played every offensive snap at left tackle (NFL-record 10,363 consecutive) during his 11-year career with the Browns. He is a two-time Browns Walter Payton Man of the Year honoree (2010 and 2016), which recognizes a player’s excellence in the community and on-field performance.

Join us as Hawkins and Thomas discuss their NFL careers and how they continue to use their platform as professional athletes and on-air media personalities to raise awareness for important social justice topics, including creating equality and opportunities in sports, education, and throughout the entire community.

This forum is part of our KeyBank Diversity Thought Leadership Series

This forum is presented in collaboration with