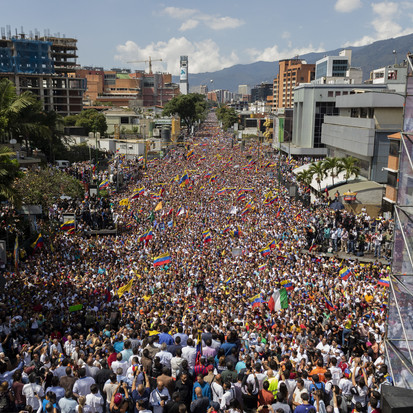 A La Calle: People, Protest, and the Road to Restoring Democracy in Venezuela

The crisis in Venezuela has been making headlines for years. As violence erupts in the streets, people without food, water, or electricity have been fleeing the country in droves. Unsustainable economic practices compounded by Nicolás Maduro’s authoritarian reign has created the perfect storm for a national catastrophe, and has inspired enormous demonstrations throughout the country, uniting people of all walks of life against the corrupt institutions that hold them down.

This ongoing humanitarian and political crisis in Venezuela was captured in the riveting documentary A La Calle, which tells the story of the Venezuelan people’s attempts to reclaim their country’s democracy. Over the course of filming, A La Calle captures opposition figures, grassroot activists, and every day citizens that work to uplift the voices of other Venezuelans and their fight against the Maduro regime.

Join us as those involved in the making of the film discuss the magnitude of the humanitarian crisis in Venezuela and its implications for every day Venezuelans and global citizens.

A La Calle is part of the 45th Cleveland International Film Festival. Tickets to the film can be purchased here. Use code CITYCLUB to receive a discount.