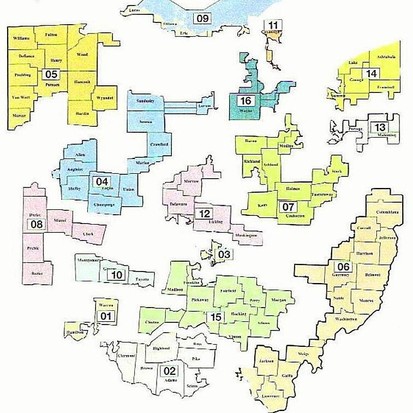 No More "Snake on the Lake:" The Future of Redistricting in Ohio

"If you can get rid of partisan gerrymandering, you make the process more responsive to the will of the voters. What you will see is political participation going up." – Alora Thomas-Lundborg

In May, the U.S. Census Bureau announced population statistics following the completion of the 2020 census. Ohio, for the sixth consecutive time, will lose a seat in the House of Representatives, bringing the number of representatives from 16 to 15. While Ohio actually gained population since the 2010 census, other areas of the country – especially in the Sun Belt and the west – grew faster. The timing of this loss is problematic as the state embarks on a new system of drawing its congressional maps, which are considered among the most gerrymandered in the nation.

It’s unclear which of the 12 Republicans and four Democrats stands to lose their district when the new maps are drawn in September. The data released in May did not indicate which parts of Ohio were experiencing population growth versus decline – a key factor in determining how the boundaries for the new districts will be drawn. Despite all the unknowns, the implications are significant especially for Northeast Ohio. Under the new legislation, the boundaries around District 9 – the aptly named "snake on the lake" – will need to be redrawn. And the region, which currently divided into four congressional districts, will likely be reduced to three as the new guidelines only permit five of Ohio's 88 counties to be split more than twice across congressional boundaries. This has huge implications for Cuyahoga County especially in District 11, the only majority minority district in the state.

How are Ohio legislators preparing for these changes? What are the implications for Northeast Ohio and Cuyahoga County? How do we ensure that the redistricting reforms passed in 2015 and 2018 are upheld – and that the process for redrawing the maps is transparent?