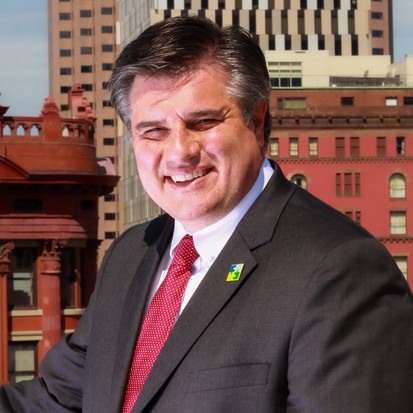 This summer, Michael Deemer was tapped to serve as the next President and CEO of Downtown Cleveland Alliance after founding President and CEO Joe Marinucci announced his retirement. This was a critical transition during a time when urban centers across the country were facing uphill battles during a challenging year. Top concerns were maintaining residential growth, boosting development, filling office space, and supporting small businesses.

Mr. Deemer joined the Downtown Cleveland Alliance in 2011 as Executive Vice President of Development, where he established the Business Development Center, a single point of contact and go-to resource for Downtown Cleveland’s public and private partners. Prior to this, Mr. Deemer was the Economic Development Policy Advisor for the Ohio Governor’s office, where he was instrumental in forming the Ohio Department of Development’s strategic plan and shared responsibility for implementing its $1.8 billion biennial budget.

The City Club is going green! Click here for the digital program.