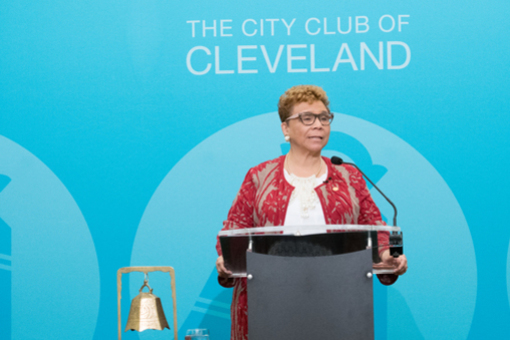 Cleveland’s Next Era of Philanthropy
An Exit Interview with Dave Abbott
Growing Smart in Cleveland: Acting Like a Community Shareholder
After the Storm: The Future of Philanthropy and Investment in Puerto Rico
The Urban League of Greater Cleveland: A Century of Advocacy
How Philanthropy Created America, and Can Rescue Us Now

James S. Lipscomb was the first Executive Director of The George Gund Foundation. During his 18 years of leadership, the Foundation became nationally recognized for the innovative approaches to problem-solving, particularly in the areas of education, community organization and women’s issues.

Mr. Lipscomb began his career in philanthropy in 1963 as a representative of the Ford Foundation in Egypt. Prior to his appointment to that station he held various positions in business, including a professorship in business administration at the University of Ghana and various posts at the Harvard Graduate School of Business Administration. For five years, he initiated, planned and implemented programs in Egypt, returning to the Ford Foundation’s New York headquarters briefly before beginning his tenure at the Gund Foundation in 1969.

Mr. Lipscomb chaired the National Council on Philanthropy from 1978 to 1980, and was a founding trustee of the Independent Sector, for which he served as treasurer at the time of his death. He was president of the City Club in 1980.