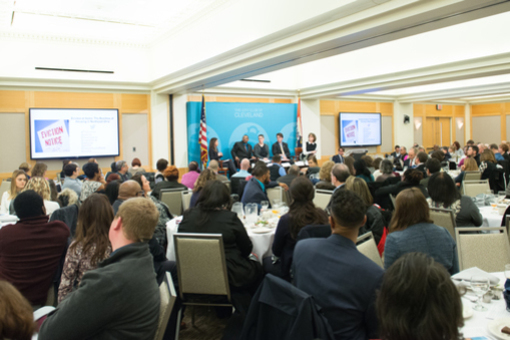 The Nelson E. Weiss Memorial Forum on February 23, 2018 featured a panel discussion on the realities of housing and evictions in Northeast Ohio.

Learning Disrupted?: The Future of K-12 Education after a Pandemic
Apple, Antitrust, and Irony: What Americans Really Think About Competition
Evicted at Home: The Realities of Housing in Northeast Ohio
Lessons Learned in the Fight for Educational Equity
Remarks from the President of the Federal Reserve Bank of Cleveland
Building a New, Better Cleveland in a Post Foreclosure World

Nelson Weiss’ professional and civic career was widely respected and much honored. An attorney by profession, he was recognized nationally as an expert in probate, estate planning, and trust law. His professional stature in these areas of practice earned him admission as a fellow in the esteemed American College of Trust and Estate Counsel. For many years, Mr. Weiss served as president and director of the law firm Burke, Haber & Berick which later became McDonald, Hopkins, Burke & Haber.

He was a Phi Beta Kappa graduate of Case Western Reserve University where he received his undergraduate and master’s degree in history. Mr. Weiss was also a graduate of the Harvard University Law School.

His life was tragically cut short in 1991 due to a gas explosion at his home. At that time, his friend and colleague Stanley Adelstein and his new law firm of McDonald, Hopkins, Burke & Haber — with the encouragement of its president Tom Keen — began to raise funds for an annual forum at the City Club in his memory.

In addition to his commitment to the City Club (he served as President in 1982), Mr. Weiss was involved in numerous civic activities. He served as a member of the Cleveland Heights-University Heights Board of Education from 1967 to 1975, and was its president in 1970 and 1974. He also was a consultant for the National Endowment for the Humanities and an alumnus of Leadership Cleveland. In addition to his professional and civic interests, Mr. Weiss was an accomplished amateur photographer.