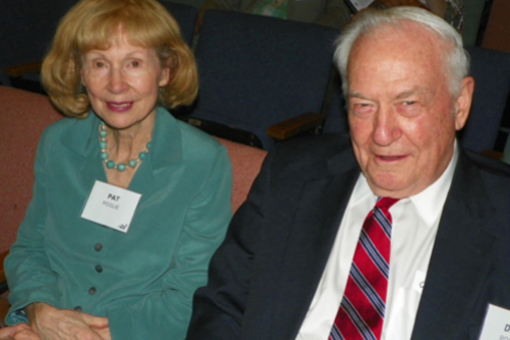 During his nine years as Managing Partner, the Firm grew from 335 to 1,250 lawyers and from five domestic to 20 worldwide offices, and became the second largest U.S. law firm. Over the years, Dick has chaired many major civic organizations including the Cleveland Foundation, University Hospitals, and the Greater Cleveland Growth Association.

He served as President of the City Club in 1998 and co-chaired the successful $2.5 million Capital Campaign, which resulted in a complete renovation of the facility.

Pat Pogue serves as a Board member of the Women’s Committee of the Cleveland Institute of Music and has volunteered with the Shaker Heights Welcome Wagon for 32 years.

She has been a tutor at Buckeye-Woodland Elementary School for the past 11 years and is a member of the Lecture Recital Club, which raises funds for music schools such as Oberlin and the Cleveland Music School Settlement.

She is also a member of a group of women who sew sleeping bags that are distributed to homeless people on the streets and in shelters through the Volunteers of America.