The City Club's Annual Forum on The Power of Ideas 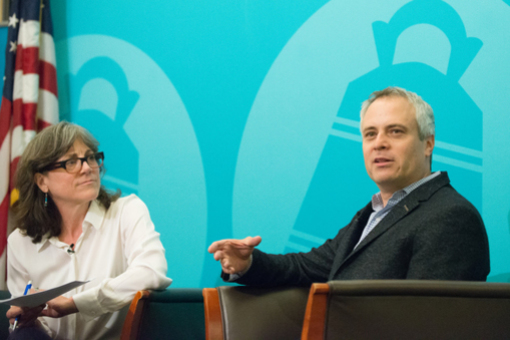 The City Club Annual Forum on The Power of Ideas on May 18, 2017 featured Brad Stone, Senior Executive Editor for Technology, Bloomberg News, with ideastream's Amy Eddings.

The City Club’s Annual Forum on The Power of Ideas is made possible by generous donations from the 1,474 celebrants at the City Club’s 75th Anniversary banquet, held on October 28, 1987 and chaired by Rena Blumberg and Paul A. Unger.

The theme of the program was “The Power of Ideas” and it featured eight distinguished speakers representing a variety of backgrounds: Gloria Steinem, Mario Cuomo, T. Boone Pickens, Eleanor Holmes Norton, Jeane Kirkpatrick, John Kenneth Galbraith, Phil Donahue, and Felix Rohatyn. Each gave a five-minute presentation on one creative idea from his or her area of expertise.

Following the occasion, a major gift was presented to the City Club Forum Foundation to endow an annual forum on “The Power of Ideas.”

The memory and spirit of that anniversary banquet live on as we gather today to hear again creative ideas from distinguished experts.