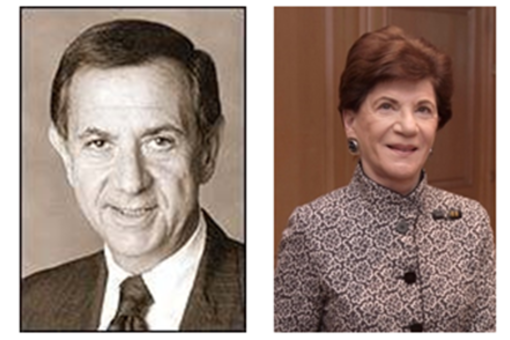 Beyond the Stage: How Karamu House is Catalyzing Creativity and Community
State of the Library
Poetry for People Who Hate Poetry
CANCELED: The Three B's: The Effect of Implicit Bias on Preschool Expulsion
A Very Long and (Almost) Victorious Battle: The Struggle for Gay Civil Rights
Cleveland Museum of Art: New Leader, New Era

The Robinsons have served the Greater Cleveland cultural arts and business community for decades. Both have received numerous awards for their civic leadership and accomplishments.

Degreed from Wellesley College and the Harvard Business School, Barbara was a piano soloist with the Boston Pops Orchestra. She is a member of the Board of Overseers of Harvard University. As chair of the National Assembly of State Arts Agencies in Washington, D.C., Barbara spearheaded a nationwide campaign to defeat Senator Jesse Helms’ 1989 attempt to abolish the National Endowment for the Arts. She is the longest tenured chair of the Ohio Arts Council and has served 13 years during which she initiated cultural exchange agreements for the State of Ohio with 14 countries. Barbara is the current chair of Arts Midwest and is National Vice President of Young Audiences, Inc. She has also chaired the Cleveland Institute of Music and the Cleveland San Jose Ballet.

As City Club President in 1972, Larry led the crusade to admit women as members. As a retailer, he developed J. B. Robinson Jewelers from 1 store to 96. In media, Larry reported for CNN Radio and for local radio and television stations from Israel, Afghanistan, Kosovo, Bosnia, Cuba, Kuwait, the aircraft carrier Nimitz off the coast of Iraq, and Hong Kong at the time of handover to China. His daily television interview program received an award for “Best Documentary in Ohio.” He served on the boards of The Cleveland Orchestra, Playhouse Square Foundation, and Bellflower Center against Child Abuse, the Cleveland Convention and Visitors Bureau, and the Center for Families and Children. He received a doctorate degree from Harvard Business School and two honorary doctorates.

Larry maintained his active involvement in the City Club until his death in 2003.